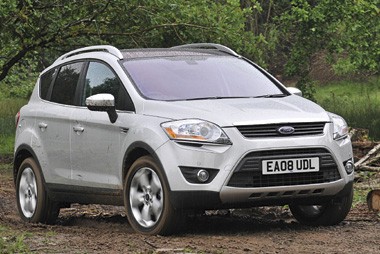 I had a conversation with a friend who was about to change her company car. It was time to hand back the Golf GTI, and she fancied an Audi TTS.

Now of course, this is plainly ludicrous.

For she has neither considered the running cost implications of this move, nor the practical shortcomings of her new sleek steed.

She thought that was probably some charge that affected those driving in London. Then CO2 levels and monthly tax bills. Again, blanks all round.

The point is, she couldn’t give a stuff whether it was going to cost her more in tax than a diesel hatchback, or that a sensible estate would have more luggage volume.

Good for her, because she is choosing a company car as many people in Britain still choose them.

That conversation led me to the Ford Kuga – a car that on paper struggles to justify its inclusion on choice lists.

Our four-wheel drive version has CO2 figures above the 160g/km barrier, branded ever thus as profligate. Its fuel consumption has resolutely refused to budge above 34mpg (our automatic VW Tiguan diesel is returning 32mpg).

And Ford keeps putting its price up to the point where it is nearly perched in a premium position (£24,445 at the last time of checking – a £1,545 rise since March).

But if I wanted a stylish, excellently nimble, fairly spacious and comfortable small SUV, the Kuga would be an excellent chum.

And it looks even more tempting with Ford’s latest contract hire offers.

Cost is important – there’s no denying it.

But in some cases, and whisper it quietly, some people actually have other priorities such as looking good and having the car they want, and some companies still let them have cars such as the Kuga.