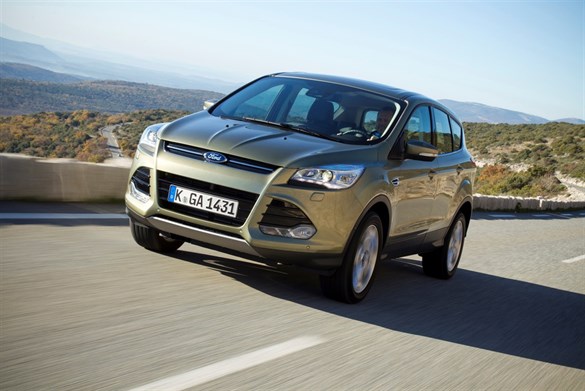 But a new transmission system is also set to make AWD versions of the next-generation Kuga sport utility vehicle significantly safer to drive.

As well as promoting sharper handling and greater traction, an exclusive Ford development called Curve Control is now included to help keep over-enthusiastic drivers out of trouble if they attempt to take corners at excessive speed.

By tailoring torque and anti-lock braking to individual wheels, the innovative gadgetry is claimed to trim 10mph per second from progress through corners when it detects the car is travelling too fast for the conditions.

“If the driver fails to reduce speed sufficiently, Curve Control will intervene to safely slow the vehicle – it’s a safeguard for drivers who enter bends with too much speed,” explained Ford Europe engineer Michael Nentwig when the revised Kuga was launched in Spain.

Despite a £355 price cut, the two-litre Titanium gets a better spread of equipment, including fold-flat reclining rear seats, an adjustable load floor, electronic power assist steering, hill start assist and a speed-limiter cruise control. It is also the first Ford to have voice-activated Sync connectivity with emergency assist as standard.

“This car builds on our key strengths. It is our highest-regarded model with customers across Europe and it has boosted the perception of our brand. Sales have exceeded expectations and it will play a leading role in expanding our presence in the fast-growing SUV sector. 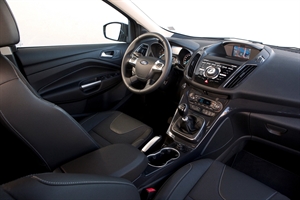 “I’m hoping our new line-up will have greater appeal in the user chooser segment, which has accounted for only one third of our annual 10,000 sales so far. However, reduced emissions mean Titanium buyers should now pay £23 less benefit tax each month and they will also spend less on fuel,” marketing director Anthony Ireson told Fleet News.

Tasked with winning more customers to the blue oval, it will be joined by the Fiesta-based EcoSport and the full-size US-built Edge in an ambitious plan for SUVs to be accounting for 10 per cent of Ford’s European sales over the next three years. 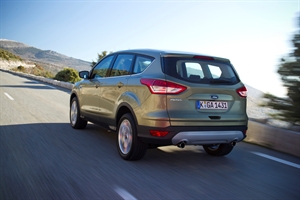 With a ‘smart’ drive system continuously adapting torque to each wheel, it has the refined demeanour that makes it as rewarding through twisty roads as it is relaxing on major highways. Improved aerodynamics and extensive sound deadening measures give the car a big hike in quality and a new dash panel and better seats head a package of interior revisions aimed at promoting near premium travel comfort.

The Kuga’s extended deck takes potential load volume to 1,615 litres, an increase of 82 litres, and a class-first ‘hands-free’ tailgate that operates with a gentle kicking motion provided the car key is in range is a £350 option.