CHOOSING an MPV could easily be interpreted as giving up on the exciting things in life. Gone is the longing for a stunning, stylish set of wheels, the thrill of a spirited drive and the spontaneity of an impet-uous weekend away with a partner.

Instead, space and flexibility have become paramount. The MPV is a signal that all past passions have been overtaken by the need to accommodate a full brood, and most likely a couple of their friends too.

And this brood isn’t complete without pushchairs, spare clothes, tissue boxes, snacks, overcoats, wellies and anything else that could possibly be needed for an afternoon at the beach.

But not all young parents are ready to give up excitement. This is something volume car manufacturers are starting to cotton on to. While Vauxhall has dangled hot turbocharged versions of its Zafira under customers’ noses for several years, Ford has now taken the lead as the first volume brand to launch a completely new model range that specifically targets these drivers – the S-MAX.

Its engineers have taken the convenience and seven-seat capacity of its new Galaxy and wrapped it in a far sexier bodyshell, perched it on a sportier suspension setting and added the choice of some very good engines.

As simple as it sounds, it really works – the S-MAX is a great product.

Kevin O’Neill, Ford of Europe’s vehicle line director for large and luxury vehicles, said: ‘The S-MAX is much sportier and very strongly tuned towards being a driver’s car.

It is a step up for people who start a family but don’t want to give up all of their freedom. It suits people who strive to have the best of both worlds: they want to have large car capacity and a true driver’s car.’

Ford wants the S-MAX to tempt young, growing families from their Audi A4 Avants but who don’t feel ready for a MPV, while also appealing to owners of the current crop of large people carriers who are looking to downsize. Certainly the S-MAX’s styling will help, as its sporty front end, pronounced wheelarches, cool side vents and lower rear roofline give it a far more dynamic presence than traditional MPVs.

Thanks to a new FoldFlatSystem (FFS), the car can be configured to seat up to seven occupants in three rows. Ford has scrapped the need to remove seats when extra load capacity is required. Now each individual seat can be folded easily and quickly, creating a flat floor for stowage.

Front and middle-row seats can slide forward and back for extra legroom and the middle row reclines like an aircraft seat for added comfort. 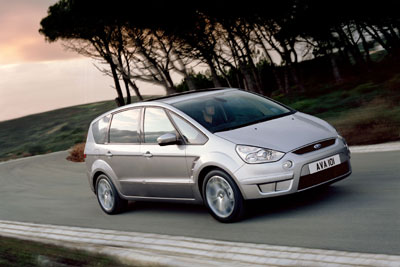 However, the rear row of two seats is fixed so passengers here will need to negotiate with the middle row’s occupants for extra space. Nevertheless, rear headroom isn’t a problem, even for average height adults.

Boot space is restricted to a couple of overnight bags if all seven seats are occupied, but there are another 26 stowage spaces dotted around the cabin. Fold the rear row and luggage capacity increases from 285 litres to 854 litres, and with both rear rows folded capacity becomes 2,000 litres.

Ford recognises that many S-MAX buyers will still want reasonable economy, so its two diesel offerings will be the biggest sellers: a 1.8-litre TDCi with 123bhp and a 2.0-litre TDCi with 138bhp. Two petrol engines will be available: a 2.0-litre with 143bhp and, for the petrol-head parent, the Focus ST’s 2.5-litre turbo with 216bhp.

Trim levels will follow Ford’s traditional range of LX, Zetec and Titanium, plus an optional Titanium X-pack upgrade. Equipment levels are very good generally, although the entry-level LX has air-conditioning, it doesn’t get alloy wheels.

FORD was so keen to emphasise the sporty nature of the S-MAX that the range-topping 2.5-litre turbocharged Duratec engine was the only variant on offer at the press launch.

Executives later admitted they expect this engine to account for only 5% of S-MAX sales, and the 2.0-litre TDCi will be the most popular version. Thankfully, that engine was available for testing in the new Galaxy (more on that in the Galaxy’s road test in the Road test section).

As anyone would expect, the 2.5-litre is a cracker. Even when hauling the S-MAX’s 1,622kg bulk, its 236lb-ft of torque from just 1,500rpm makes driving a thrilling experience – 0-62mph takes just 7.9 seconds and it will cruise all day easily on motorways – and the six-speed manual gearbox is smooth and direct, encouraging regular changes. The downside is fuel economy: Ford’s combined figure of 30mpg plummets dramatically when the car is being driven hard. Fleet managers with their eyes on consumption would be recommended to permit the diesels only. 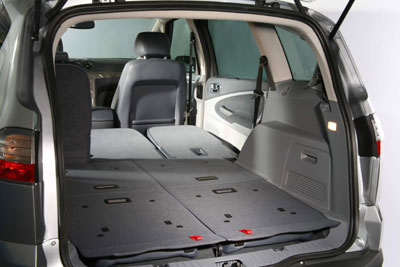 Ford has done a fantastic job making sure that the chassis and suspension is up to the job of making the S-MAX a great driving experience. It has a lower centre of gravity than the Galaxy and the suspension is firmer, but this keeps the car well planted on the road and provides a directness of steering that MPVs generally lack. Body roll is kept well in check and even on rough surfaces the ride remains comfortable, while the brakes are strong and give reassuring feedback through the pedal.

Drivers can also specify the S-MAX with Ford’s optional Interactive Vehicle Dynamics Control with continuously controlled damping. This links to the car’s ESP system and automatically adjusts the dampers’ firmness every tenth of a second to further enhance roadholding, while the driver can select between comfort, normal and sport modes.

Instrumentation is clear and the controls are well laid out for driver convenience. Ford’s designers wanted to create a ‘cockpit’ experience so created a centre console which swoops down from the dashboard, housing controls for the air-conditioning and entertainment system.

This is enhanced by the addition of Ford’s new Human Machine Interface (HMI), which uses toggle switches on the steering wheel. Clearly the S-MAX’s designers have learned from their more prestigious rivals’ unnecessarily complex controls, and instead have created a simple, effective control system which has the modern mobile phone’s menu system as its biggest influence.

THE S-MAX has moved the goalposts in this segment. It looks great, drives wonderfully and still provides the space and flexibility that families require, at a very reasonable £16,995 entry price.