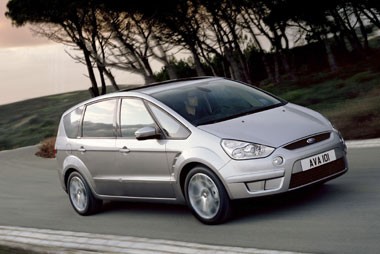 As a childless bachelor, I had to find some way of testing the versatility and family friendliness of the Ford S-MAX.

After deciding that rounding up random children and driving them around was probably not a great idea, I settled on the more practical (and legal) option of acting as taxi driver to a group of old school friends on a night out.

The S-MAX raised a few eyebrows when it was first unveiled – with the Galaxy already in the Ford stable, why did it need another seven-seat MPV?

Ford’s answer was that the S-MAX would also appeal to the driver.

It’s sleeker and more stylish than the Galaxy and its dynamics are much more oriented towards the sporty end of the motoring spectrum.

Before I picked up my raucous gabble of 20-somethings, I spent considerable time in the S-MAX on my own.

And it really is rather good. I’ve never driven an MPV that handles so well – it really is quite extraordinary how a car that weighs considerably more than one-and-a-half tonnes can whip around corners with ease.

It doesn’t roll excessively, nor does it overrule your efforts to turn with calamitous understeer should you be pressing on.

It just does as it’s told.

And the oft-seen downside to sportiness – a harsh ride – never really showed itself.

Ford’s 2.0-litre TDCi engine is a really good one – perhaps the slightest bit chuggy, but it pulls smoothly and strongly thanks to 138bhp and 251lb-ft of torque.

It is mated to a six-speed automatic gearbox, which is hardly noticeable when driving.

So, back to my chauffeuring duties.

Earlier, I’d flattened the rear two seats which proved to be simple – lift up the bottom cushion, pull a red toggle on the back and down they go.

However, while the loading surface was flat, it had big gaps between the seats which could easily allow smaller items to slip into them.

Getting the seats up was more of a struggle, involving simultaneous lifting of both bottom and upright bits of seat until they clicked into place.

There might be an easier way to do it, but if so it wasn’t that intuitive.

Once up, all six of my friends managed to climb in without problems, and reported decent amounts of room on both rows of rear seats (although the rearmost passengers said long journeys could prove testing).

However, with the back row up boot room is at a premium – hopefully your six passengers won’t have a suitcase each, or things could get cramped.

I’m really rather impressed with the S-MAX. It looks good, it’s nice inside with a commanding driving position that doesn’t compromise its dynamic driving side.

As with all recent Fords it’s well made from quality materials, and it will happily ferry seven full-sized and mildly boisterous adults in comfort and style.

P11D PRICE
The top-of-the-range Citroën is cheapest, and comes with plenty of toys as standard. But with 110bhp it is the least powerful. The Renault and Vauxhall are close behind, both with around 150bhp. The Ford has 138bhp. All cars have 16-inch alloys, save for the Zafira with 17s.

EMISSIONS AND TAX RATES
Citroën plays its trump card – it puts out far fewer emissions than the opposition. It sits eight bands lower when it comes to company car tax – a 20% taxpayer would face a £74 monthly bill. Renault drivers would pay £102, Ford owners £106 and those in the Zafira £104.

SMR COST
With low parts prices, the Ford is the cheapest to run. But an honourable mention must go to Vauxhall – despite the need for bigger tyres, the Zafira is second mainly thanks to a large 20,000-mile service interval. The others
need attention every 12,000 miles or so.

FUEL COST
With a combined economy of 49.6mpg, the Citroën is the most frugal car and will cost more than £1,600 less to fuel over three years/60,000 miles. The Vauxhall and Renault both make 39.2mpg and will cost slightly less to run than the Ford, which returns 38.7mpg.

DEPRECIATION COST
The Ford, with a CAP residual value of 38%, will hold its value best over three years/60,000 miles. The Citroën will lose less than £100 more over the same period, with an RV of 35%. The Vauxhall and Renault are outclassed here, with RVs of 29% and 27% respectively.

WHOLELIFE COST
Cheap to buy and with outstanding fuel economy, the Citroën is the cheapest car to run over three years and 60,000 miles. But the Ford is close behind, costing only a few hundred pounds more over the same period. The Vauxhall and Renault are left behind.

But with less power than its rivals it may not be the driver’s choice.

That accolade would have to go to the S-MAX, which has more oomph, is excellent to drive, and also has more room inside.

With that in mind, the Ford is our winner, but the Citroën has an honourable mention and would perhaps have more appeal to those wanting to look after the environment as well as their wallet.

Both the Zafira and Grand Scenic are decent cars, but can’t match their rivals either rationally or emotionally.