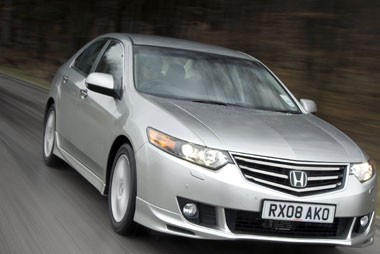 Honda has been doing rather well of late, with plenty of plaudits and plenty of fleet sales for its new
CR-V and Civic.

But now it faces its biggest challenge.

It wants to take the Accord upmarket to challenge the Audi A4 and BMW 3 Series for a slice of the premium pie.

Oh dear, we’ve heard this before, and the litany of cars that have gone up against these giants of the corporate market reads like a who’s who of nearly-men: Lexus IS, Jaguar X-Type, Alfa Romeo 159 and Volvo S60 to name four from the recent past.

So why should the Accord be any different?

Also, it says sales are being picked up from previous premium compact saloon owners.

It believes this shows that Honda can sell cars at that premium price level.

Possibly that’s not comparing eggs with eggs, but you have to remember that Honda isn’t actually pitching the Accord at the 3 Series and A4 ranges per se in the fleet market.

It is aiming squarely at A4 2.0 TDI and 318d/ 320d in particular, where it feels its higher levels of equipment, space and a dash of trustworth-iness will make up for any shortfall in brand equity.

That seems a much more achievable goal.

So how have the engineers concocted a heady brew that will see Audi and BMW buyers come flocking?

By benchmarking BMW for ride, handling and engines, Lexus for technology and Audi for quality and consistency.

If it has hit all those targets, Honda has got itself quite a car.

Taking on the German attitude, rather than the usual Japanese approach of revolution, the new Accord is very much an evolution of the outgoing model.

At first glance its familiar proportions are almost all too familiar, but it is significantly wider and slightly lower than its predecessor, and the subtleties of the changes become more obvious as you look at it: creases heading in seemingly conflicting directions, while the long front lights and wide grille create a sharp look.

The Accord has fully Euro V-compliant engines from launch, with the new 2.2-litre i-DTEC diesel a key engine for the fleet sector.

Power and torque levels have been increased with output at 147bhp, while there will be a much-needed higher power version later.

You can’t go up against the premium boys without power and performance.

All three engines are matched to six-speed manual transmissions, while both petrol engines have the option of a five-speed automatic.

Although the new Accord is significantly more expensive than the outgoing one, it is still better value than an Audi or BMW, and there is a lot of hi-tech kit
available.

Vehicle Stability Assist (VSA) is standard across the range while an innovative system called Motion Adaptive EPS detects instability in slippery conditions during cornering or under braking and automatically initiates small steering inputs aimed at prompting the driver to steer in the correct direction.

Bernard Bradley, Honda UK general manager – cars, expects fleet sales to increase with the launch of the new car and the fleet mix to increase from the current level of 40%.

He said: “Our most recent Accord derivative, the Sport GT, was designed to appeal directly to the corporate market, with high interior spec and great exterior styling. It’s no surprise, therefore, that the car quickly became our best seller, making up 50% of total corporate sales.

"The new Accord will be an evolution of this car.”

With current Accord starting at around £16,500 and the new model at £19,250, this represents a significant risk.

Early indications are that residual values will match low-end 3 Series models in the low-40s for three years/60,000 miles, which suggest it’s a risk that might well pay off.

Such is the importance of the new Accord to the fleet sector, Fleet News was the only magazine in the world invited to drive the new Accord before its launch.

In fact, we drove it to the launch venue, in Austria, in the weeks preceding the event.

A thousand miles with the car certainly gave us a chance to understand what a high-mileage driver will get from the new Honda.

And the biggest leap forward is in refinement and comfort – pretty important features for the target customer.

The new i-DTEC diesel is very refined – most of the time. It’s a bit on the clattery side at lower revs, but smoothes out above 2,000rpm.

Once at a steady cruise it lapses impressively into near-silence, with only some tyre and wind noise apparent.

The cabin is certainly bolted together well, but the styling and layout will be a matter of opinion.

To my eyes, it’s a little cluttered, not having the studied cool of an Audi, but once you learn where everything is on the multitude of buttons and knobs, it all works efficiently enough.

What is not in doubt is how comfortable it is.

The driving position is excellent while the seats are exceptional. I did 1,000 miles in two days and there were no complaints from my body.

Apparently, Honda spent so much money on the seats that there wasn’t enough left to make the spare wheel well round – it had to be a cheaper square shape.

Ride quality is good, softening out the sharpest ridges, while through corners it feels what it is: a wide, flat car. Not BMW exciting, but nicely composed.

What more do you want every day?

The new Accord is vastly more comfortable and refined than its predecessor with much more presence and a lot of kit as standard.

It’s a really good car that gets better the more you live with it.

But is it good enough to live with Audi and BMW on the choice list?

That will be up to your drivers to decide.