GENTLEMEN, start your engines. It’s a well-worn phrase, but increasingly manufacturers are turning it into the equivalent of firing up the Space Shuttle.

It used to be enough to push in the key and turn on the ignition, but not anymore. Over the past few months I’ve driven a number of cars and the starting combinations are mind-boggling.

In one case it is ‘clutch down, slide in card, push button’. In another, ‘push in whole key, clutch down, push key in again’. The options are endless – and pointless really.

The only reason to move away from a normal key is with keyless ignition, where there is no need for a key at all.

But it seems everyone is doing it, including Honda. Our long-term Civic has one of the most unusual combinations, as you have a normal key (without a key that folds away into the fob) and normal ignition, but just when you expect to hear the engine burst into life, there is no more ‘give’ in the lock. Instead, you have to push a red starter button on the right-hand side of the console.

Now, I love starter buttons. In fact if you had to flick a bank of switches and radio in to mission control to start, I would love it.

But this is an unhappy compromise – a low-cost solution to meet the space-age look of our car. 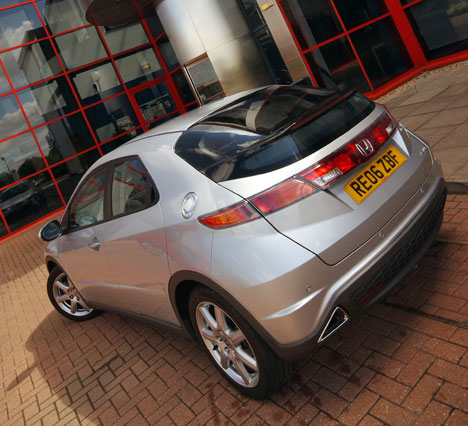 The key isn’t the only thing that has divided opinion, as the wiperless rear screen isn’t winning many friends either, especially on frosty mornings. I can live with the spoiler blocking my rear view while driving, especially at night, as it stops me from being blinded by other drivers’ lights, but the downside is reversing. You can’t see a thing.

Despite this I don’t want you to get the impression I don’t like the Civic. I absolutely love it.

I couldn’t wait to get my hands on it, especially because I know for certain that its 2.2-litre diesel is one of the best in the business and I’m convinced it will return 60mpg in the right hands (mine).They don’t call me feather foot in the office for nothing, and I regularly returned 50mpg from our previous long-term Accord fitted with the same engine.

The Civic’s build quality is superb, there’s loads of space, the looks are wonderful, the ride and handling very good; it’s quiet, efficient, sporty, fast, economical and it holds its value well.

This car was designed to make a statement, to divide opinion and start conversations. Everywhere I go people ask about it. It generates debate.

Just like Honda’s TV adverts, the Civic makes a statement about the brand that lifts it away from the masses, but also keeps it separate from the badge snobbery of the premium brands.

The Civic is fresh, different, well-built and a joy to own and drive. Honda wanted to break away from its traditional market and win over new customers with its updated model. It’s job done in my opinion.