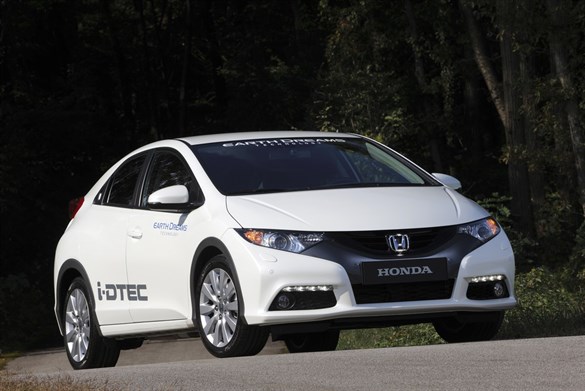 Honda launched its first home-grown diesel engine in 2004, and impressive though it was at the time you’d be forgiven for thinking it hadn’t really taken the strong appetite for diesel among European customers seriously.

Although the original 2.2-litre diesel was replaced in 2008 with a new engine, that’s all there was until now.

The latest version of the Honda Civic, having survived a tentative first year in fleet with only a 150bhp 2.2-litre engine serving diesel-only fleets – following a year without any diesel engine for the previous version of the car – is ready to hit UK roads with an impressive new 1.6-litre diesel.

Taking a look at the headline figures of this engine the advantages are clear. CO2 emissions are 94g/km while its power output is 120bhp. Its torque output is an even more impressive maximum of 221lb-ft, with more than 200lb-ft available over an expansive low- to mid- rev range.

To give this some context, the 94g/km Volvo V40 achieves its ultra-low emissions level with a 115bhp engine, while the same engine in the standard 1.6-litre diesel Ford Focus achieves 109g/km. The new Volkswagen Golf, which Honda has used as a class benchmark, manages 99g/km in standard 105bhp 1.6 TDI form.

So an on-paper advantage to the Honda there, and given that from April 2013 the threshold for 100% first year writing down allowance shifts from 110g/km to 95g/km, there could be cost efficiencies for outright purchase fleets in choosing the new 1.6-litre engine.

Honda might also have been losing our to some fleets that reimburse mileage at AFR, with its sizeable 2.2-litre engine (despite cost-per mile projections) would be paid back at 18p per mile for business mileage claims.

The new 1.6-litre, which will also be significantly more frugal with an official fuel consumption figure of 78.5mpg on the combined cycle (as opposed to 68.9mpg for the 2.2-litre), will see the amount paid back to drivers reduced.

While this might all sound rather dry and earnest, it should not be ignored that Honda is also trying to inject more fun into its products while improving efficiency.

It is 54kg lighter than the current 2.2 i-DTEC, and measures have been taken to reduce friction and improve fuel efficiency. However, this significant weight saving under the bonnet should also help make the 1.6-litre feel much more nimble on twisty roads.

We tried the car for a brief drive a month before the main media launch and early indications are promising.

Our pre-production model was perhaps a little noisier inside the cabin than expected (although to be fair outside the car it seemed very quiet), but acceleration and overall refinement are excellent.

The gearchange is slick and engaging, and the car feels keener to gain speed when you put your foot down than its 1.6-litre rivals, thanks to its abundance of torque – noticeably more than rivals from Ford and Volkswagen.

Our limited time behind the wheel was around an oval test track at Honda’s R&D centre in Tochigi, Japan, and while it provided a good taste of what to expect from the production cars.

And in the latest Civic you get one of the roomiest cars in its class with a far more upmarket feel inside than its predecessor, although its styling isn’t to everyone’s liking.

It has some very strong opposition in the sector, with this engine launching around the same time as the new Volkswagen Golf.

The Golf has been introduced with some exceptional residual value predictions, but as our running costs figures show, the Civic’s fuel consumption claws back enough of an advantage to finish a tiny fraction of a penny per mile more expensive than the equivalent Golf.

The 1.6-litre is also likely to end up in the CR-V in a year’s time and should the next Accord come to Europe it would be another prime candidate given the appetite for downsizing engines.

Times might have changes while Honda has been getting this engine ready for market, but the company seems to be on target for the car’s performance, efficiency and running costs.

This has to be good news for any fleet that has been waiting for Honda to introduce this engine.