IT’S easy to see why Britain has a love affair with SUVs like the Honda CR-V. They are big, comfortable, solid, economical and they look brilliant, too.

So when a big swap among the Fleet News vehicle testers occurred the other week and I was handed the keys to this vehicle, I was a happy man.

I hadn’t driven a CR-V before, but had tried out other rivals such as the Nissan X-trail, so I knew exactly what to expect.

The Honda’s seats are big, solid and comfortable, with just the right amount of side support, there is acres of space for driver, passengers and luggage and a general feeling that if this vehicle was involved in a crash, it would probably come off best.

What I didn’t expect, though, was such a smooth, sporty diesel engine to be lurking under the bonnet.

The 2.2-litre diesel unit is the same as the one you’ll find in the firm’s Accord upper-medium car and is almost as silky as any petrol unit you’ll find. 0-60mph comes in a tad over 10 seconds, but it feels quicker.

And for those who want to risk a run-in with the law, the top speed is 111mph.

But it’s not only out-and-out power that impresses me with this car – it also lacks the pitching and rolling on fast corners that sometimes accompanies vehicles such as these, thanks to their high centre of gravity caused by the need for plenty of ground clearance.

So I’ve been piling a fair few miles on the CR-V in the past few weeks.

In fact, I seem to have been spending more time in my car than I have in my house so have had ample time, while sitting in various motorway jams, to twiddle about with all the gadgets. I’m one of the world’s biggest technophobes, but in an idle half-hour sitting stationary on the M25 the other evening, I flicked on the sat-nav system and attempted to use it. My view is that if you have to look in the handbook to make it work, then it has failed.

Et voila! I managed to find my way around the various functions after a couple of false starts, so to me, this system has passed the test. I also like the layout of the dashboard, which has a set of knobs and switches that are easy to use, unlike some cars I’ve tested recently.

But the biggest bonus is the economy. 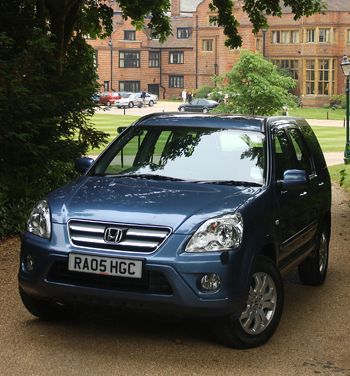 A lot of my driving has been of the fast motorway variety but the CR-V is still returning almost 40mpg.