I RETURNED from a sunny week with the family at the seaside in transport provided courtesy of our long-term Honda CR-V, to discover we had driven into stormy waters over our choice of vehicle.

According to a recent report from Greenpeace – Offroad Cars, Onroad Menace – I am a polluter and a maniac.

It claims that vehicles designed for off-road terrain consume 300% more fuel than road cars, emit three times the pollution and, in an accident, are three times more likely to kill a pedestrian than an ordinary passenger car.

The Society of Motor Manufacturers and Traders dismissed the research as ‘inaccurate and flawed’, and I would present our long-term 2.2-litre diesel off-roader as solid backing for their counter-argument.

After several stretches of motorway driving, town dawdling and B-road bouncing, our Honda returned 40.1mpg over about 600 miles.

Most people would be quite chuffed with this, although I must admit to being a little disheartened, as the trip computer was reading 44mpg. It has been as high as 49mpg, suggesting real world fuel economy of 45mpg, well in excess of the Honda’s combined figure of 42mpg. Furthermore, the only thing splattered across the bonnet was a healthy sheen of flies.

We didn’t really need four-wheel drive, but the Honda is two-wheel drive most of the time anyway, and there barely seems to be any fuel economy penalty for heaving around the extra running gear.

The lofty driving position was perfect for loading children into car seats without bending and risking a holiday with backache.

In addition, the generous boot space, plentiful cubby holes and central foldaway table came into their own when dealing with half a tonne of buckets, spades, kites, inflatables and spare clothes.

The hefty side-hinged rear door proved its worth as it allowed unfettered access while packing and unpacking – as long as you didn’t reverse park, though.

Because it is so wide, if you do need to back into a space then, halfway in, you have to climb out and dig everything you need out of the boot before going all the way into your parking space.

The car shows its SUV underpinnings when cornering, which discourages spirited driving unless you like the sound of screeching tyres.

But these are niggles, as the CR-V has proved to be a lot less fuss than I expected – it is even relatively easy to park.

Which makes it frustrating when I read about the antics of the anti-SUV brigade. 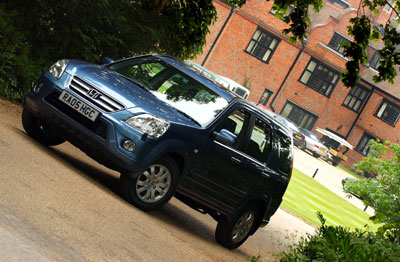 Even if I told them, they wouldn’t believe that the Honda was as economical as a supermini and perfectly safe in the right hands.

The car came back from our holiday without a scratch, but judging by the constant barrage of criticism for SUVs, it seems its reputation is already damaged beyond repair, which doesn’t seem fair at all.