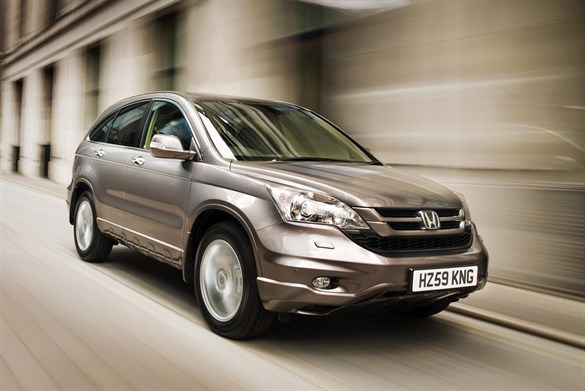 For a brand which is famed for its environmentally-friendly models, such as the Insight and the forthcoming CR-Z hybrids, Honda’s 4x4 CR-V might at first seem to be an odd one out in its range.

But the CR-V is more than just one of the UK’s favourite soft-roaders, it also manages to deliver fuel economy that is an effective response to environmentalists who dismiss all 4x4s as ‘gas guzzlers’.

The British built 4x4 has been revamped for 2010 and it features Honda’s second generation diesel engine, the i-DTEC, which combines excellent performance with great fuel economy.

Now that the engine of our long-termer has drunk a couple of tankfuls of diesel, it is within touching distance of this figure, offering 42mpg. I would gamble that it will easily beat this figure during its time with us, something that can’t be said of many long-termers we run.

The 2010 CR-V retains its great handling, car-like drive and good specification levels, while outside there have been some nips and tucks in response to customer feedback and its wish to entice buyers from cars including the Volkswagen Tiguan, BMW X1, Land Rover Freelander, Nissan X-trail and Qashqai and Toyota RAV 4.

Sales in the fleet market are modest, with business customers expected to account for 35% of the predicted 9,000 sales this year, which might reflect the fact that off-roaders tend not to appear on many companies’ choice lists.

This is a shame, because the Honda’s frugal performance and high residual values (38% over three years/60,000 miles or 29% over four years/80,000 miles) mean it could actually cost less than some traditional choices offered to company car drivers.

Technically it’s not even a four-wheel drive either, as most of the time the engine is only powering two wheels. The four-wheel drive system only steps in when the front wheels start slipping, enhancing its frugal nature.

Still, it certainly looks the part, with a suitably chunky interior that is well equipped and comfortable enough to dispatch long motorway journeys without fuss or sore backs.

It also delivers on Honda’s promise of car-like handling, with quick response to steering inputs and flat cornering.

Overall early impressions are excellent, with the combined stereo and sat-nav providing the only source of irritation and exasperation. Aside from refusing to connect to my phone via Bluetooth (the only car I have tested recently that refuses), it feels overly complex, fiddly and the screen suffers particularly from sun glare.

It may take some time to get used to, but as the rest of the car is performing so well, I feel I will be able to adapt to the odd niggle by the time of the next roadtest.