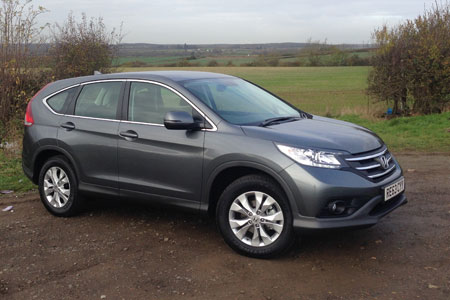 Adownward trend in CO2 emissions has put the growing SUV segment on the radar of company car drivers and the CR-V appears perfectly placed to cash-in.

During its time on our fleet, the CR-V has struggled to get above 50mpg, partially due to the high level of urban motoring it does.

However, this return is acceptable when you remember you’re behind the wheel of a big car.

It not only rivals other D-segment models for space, but could sway C-segment car drivers wanting something with a bit more room.
The CR-V features the same lightweight 1.6-litre i-DTEC engine as the Civic.

This sees an aluminium cylinder head joined to an open deck aluminium block.

It weighs 47kg less than Honda's 2.2-litre i-DTEC engine – the unit it replaces.

All the individual components have been redesigned to minimise their weight and size, and advanced production techniques have reduced weight even further.

Weight reduction is a strategy many car manufacturers have adopted, such as Mazda with its CX-5 SUV.

The Mazda has an official fuel economy figure of 61.4mpg over the combined cycle – slightly lower than the Honda – and running costs of 35.41p per mile over four years/80,000 miles.

That’s marginally better the CR-V’s 36.56ppm, with the CX-5 having better SMR and depreciation costs.

However, the 1.6-litre i-DTEC engine in the CR-V continues to impress and as a package will have definite fleet appeal.