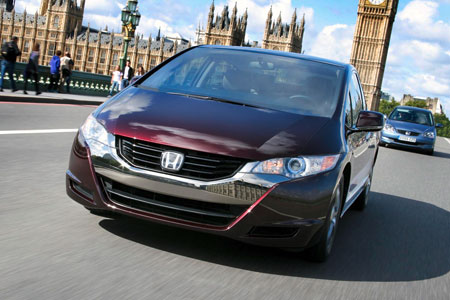 Honda has been at the forefront of development of alternative fuels and electric vehicles. The original Insight was one of the first petrol-electric hybrid cars on the market and today’s hybrids are only now beginning to reach its level of fuel efficiency and low CO2 emissions achieved 15 years ago.

The company has been one of the pioneers in developing hydrogen fuel cell vehicles – which use electric motors, are fuelled with hydrogen and emit water vapour.

In California, the FCX Clarity, with substantial financial support from the state, is being offered for lease at around £500 or so a month. It’s still relatively expensive in terms of how much we pay for a three or four-year lease in the UK, but with various incentives for low-emission vehicles in California it seems to be the right vehicle to use and to be seen in for many.

The FCX Clarity is an upper-medium size car and comes with all the performance you’d expect from a strong four-cylinder diesel, except that this has an electric motor and produces no emissions other than water vapour.
It’s roomy, has a decent-size boot and will travel up to 270 miles on a tank of hydrogen.

Its futuristic design would make it stand out on UK roads, more than any other electric vehicle currently on sale. But it’s a real production car that is a good and practical example of what can be achieved now.