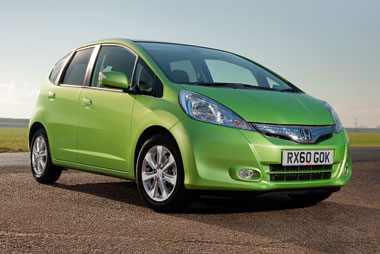 The Jazz has been a huge success story for Honda since the first generation was introduced in 2001.

It’s the Japanese firm’s best-selling model in the UK and has a loyal band of repeat customers.

Highly regarded by many public sector fleets, the Jazz’s cast-iron reputation for reliability is very much in its favour, too.

With that kind of solid foothold on the market, an eco friendly hybrid version can’t do the Jazz any harm at all.
Honda’s IMA hybrid system – already found in the Insight, Civic Hybrid and the CR-Z coupé – has now made its way into the Jazz.

It consists of a 1.3-litre petrol unit with an electric motor sandwiched between the engine and the gearbox, and a battery pack mounted beneath the boot.

The benefits include fuel economy of 62.8mpg on the combined cycle and emissions of 104g/km.

The downside is that the Jazz (and Honda’s other three hybrid models) does not fall below the 100g/km mark.

Changes to the London Congestion Charge regulations this year will see hybrids that emit 100g/km or more qualify for the charge, which is a serious blow for Honda.

The company admits this is a setback, but argues that the Jazz is still cheap to run and that London isn’t its definitive market, as its hybrids sell well in various areas around the UK – Scotland and Gloucester being two of the strongest.

In addition to the hybrid drivetrain, the Jazz has undergone a number of subtle changes.

The hybrid is distinguished by a clear grille and a blue chrome finish on the lights, numberplates and the grille.

Darker dash plastics, chrome-ringed air vents and optional leather seats are the only significant changes inside.

A CVT automatic gearbox is available again. This is the only choice with the hybrid and an option with the standard Jazz.

It’s back by popular demand after it became an option on the first generation model in 2002. In 2008 it was replaced by a sequential electronic manual transmission.

When left alone, the CVT is reasonably smooth but it’s a little lethargic when changing gear with the wheel-mounted paddles.

The 1.3-litre engine and electric motor don’t make for the most potent of hybrid systems.

Honda claims the Jazz is capable of travelling on power from the electric motor alone at low speeds and for short periods of time, but that’s difficult to achieve.

Toyota’s Prius and Auris HSD hybrids are more adept in this area.

Rather than being a stand-alone power source, the motor is there to lessen the work for the engine and drag down emissions levels.

Even so, the Jazz requires a heavy right foot to make progress on A-roads and motorways, but it’s adept when it comes to urban journeys.

Honda has made mild adjustments to the suspension to soften the slightly firm ride of the outgoing car, and it’s now genuinely comfortable. Light steering and an effective stop-start system add to its prowess around town.

The price tag of £15,995 renders the Jazz the most affordable hybrid car on the market, but that’s still a considerable premium over the standard model. That said, the running costs are easy to swallow.

If the majority of journeys are short and in urban areas that aren’t subject to a congestion charge then the Jazz Hybrid is an appealing choice.