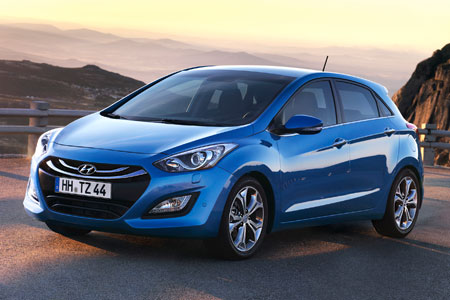 It’s bigger, better and costs significantly less to operate than its predecessor. But does the latest Hyundai i30 have what it takes to pose a serious threat to rivals in the highly-competitive sector for small family hatchbacks?

The question leaves Hyundai Motor Europe senior vice-president Allan Rushforth in no doubt. “We have outperformed the European market for 36 consecutive months and this car will be a cornerstone of the success we are set to achieve this year.

“It is a benchmark of the quality standards now coming from our brand and it sets a new benchmark for the segment. Its predecessor became a landmark model when it was introduced five years ago and this car builds on that with exceptional design, innovation and best in class cost of ownership,” he said.

Speaking in Spain as the next-generation i30 was being launched to European fleet specialists, Rushforth told Fleet News that he was confident his company’s new blend of low tailpipe emissions and high running economy would prove to be a winning formula in spite of the economic challenges that remain across many markets.

Hyundai UK national fleet sales manager Martin Wilson added: “This car certainly moves the game on for us. We think it has all it needs to mount a direct challenge to the Ford Focus, Vauxhall Astra and Volkswagen Golf.

“We have come a long way in the last few years. Our first i30 ticked a lot of boxes but never matched the sector pacesetters in styling finesse.

“With its sexy looks, our new car is as fashionable as anything in the marketplace.”

New from the ground up, Hyundai’s best-selling fleet model will reach UK showrooms in early March in a 16-strong range powered by 1.4-litre and 1.6-litre petrol engines and CRDI motors sized at 1.4 and 1.6 litres offering three output levels.

With its European-developed 1.6-litre diesel engine combining 97g/km tailpipe emissions with a 115mph top speed and 70-plus mpg, the mid-range Active is expected to be the car that opens the door on substantial fresh opportunities in both business and private sectors.

Boasting a sleeker profile, curvy styling and an attractive front end topped off with distinctive LED daytime running lights, the new car has a more upmarket kerbside stance, albeit at the expense of restricted visibility through a smaller rear window – although standard-fit rear parking sensors help compensate for the reduced glass area.

It also punches above its weight inside with a tasteful dash panel and an almost total absence of windscreen reflections emphasising the upscale environment promoted by gloss black and alloy effect trim, neat detailing and a steering wheel with audio and phone controls.

Specification borders on the upmarket too, with a glove compartment outlet included in the air conditioning system, cruise control with a speed limiter, height and rake-adjust steering and leather finish for the wheel and gear knob.

The car stands on smart alloy wheels and features stop-start technology, hill-start assist, a trip computer, power windows and power steering with a choice of three levels of assistance as standard.

Performance is lively from the latest-generation Hyundai VGT unit, which pulls stoutly from low speeds in a high sixth ratio. Geared to provide 30mph per 1,000rpm in top, it promotes effortless and subdued long distance cruising in a package that delivers improved handling composure from increased track width.

Significantly, the car backs Hyundai’s greater market aspirations with improved head, shoulder and legroom. Load capacity is also increased to 378 litres with the rear seats in place and 1,316 litres with them folded – more than the volume offered by any of its rivals.

“We need a successful C-sector car and this is it,” said Wilson.