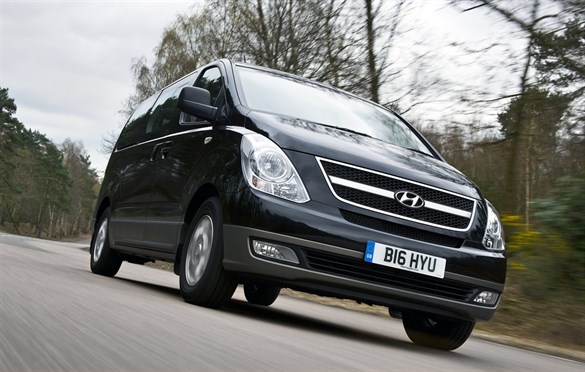 Fleets and company car drivers face myriad options when choosing a people carrier. Do they opt for a compact MPV as an occasional seven-seater, a mid-range model with ample passenger room but limited boot space, or a full-size car which swallows both people and luggage?

And that’s before they consider premium versus mainstream or budget.

We opted for an extreme: Hyundai’s eight-seater i800, the taxi and executive car hire favourite which goes up against Volkswagen’s more premium offering (Transporter) and the likes of the Peugeot Expert Tepee and Fiat Scudo.

The i800 starts at £22,170; our 168bhp 2.5-litre CRDi diesel automatic costs £23,725 (P11D). It accommodates eight in a 2+3+3 configuration, with each seat offering both ample width and legroom for passengers. Access to the rear is via twin sliding doors, sadly not remote-operated and quite heavy to open. The boot was sufficiently large (851 litres) and stores the spare tyre beneath the floor.

This is a big vehicle, too big for some, although surprisingly manoeuvrable around town centres.

However, the firm ride was harsh over potholes, bringing complaints from those in the rear-most seats.

Equipment levels are good, with this model including rear parking sensors, ESP, air-con with second row control and USB/aux inputs. Bizarrely, though, the on-board computer offered average speed, journey distance and distance to re-fuel but no mpg read-out.

The official combined fuel figure is 32.1mpg; we weren’t too far off achieving that figure over almost 500 miles, much of it completed with six passengers.

But price is only one element – how do they compare on running costs? Here the gap narrows between the i800 and Transporter thanks to the latter’s better fuel economy and residual value. 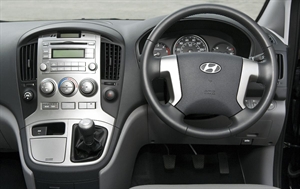 But they have a clear advantage on CO2 emissions and, therefore, fuel costs. The Expert emits 199g/km, the Transporter is 211g/km and the manual-only Scudo 183g/km (which boosts its 4yr/80k costs – see panel right).
In contrast, the i800 produces 231g/km.