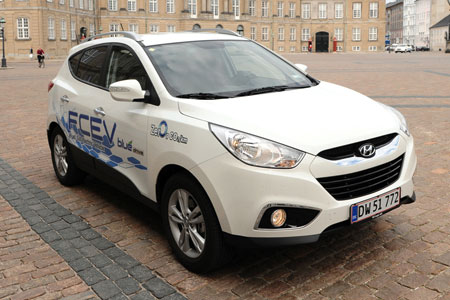 Some of the first fuel cell production cars on the roads in the UK could be Korean. Hyundai has now reached the stage where it has vehicles on trial .

We drove a prototype hydrogen fuel cell ix35, which is a clear demonstration that the technology is ready to be used in Hyundai’s current generation of products.

With the exception of the area under the luggage compartment being sealed off, it’s difficult to tell it apart from diesel and petrol ix35s on display at showrooms across the UK.

The ix35 is the third-generation fuel-cell vehicle from Hyundai, and it presents a strong case for being a truly viable everyday car, retaining the safety, equipment, convenience and performance of the off-the-shelf ix35.

Performance is strong, with the excellent response and acceleration we’ve come to expect from electric cars, and – at least when the number of sites that can facilitate refuelling with hydrogen increases – it won’t have the same range concerns putting off some potential EV buyers.

Unlike battery electric cars, fuel cell vehicles refuelled with hydrogen already have a range comparable with conventional petrol cars. Equipped with a 136bhp fuel cell stack and two hydrogen storage tanks, the ix35 FCEV can travel up to 325 miles on a single tank of compressed hydrogen and reach a maximum speed of 100mph.

Hyundai claims to be the only car manufacturer ready to commercialise its fuel-cell vehicle and plans to do so by the end of 2012, with an initial production run of 1,000 fuel-cell vehicles.

Hyundai is planning to supply fuel cell vehicles to Government and private sector fleets, leading up to mass production, scheduled for 2015. The only factor holding it back so far is the lack of infrastructure.