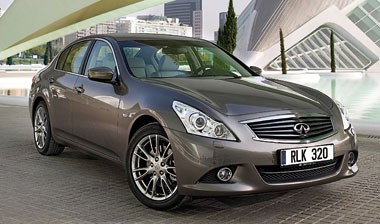 Although most people have yet to see one, new premium car brand Infiniti has decided its G37 upper-medium saloon needed an updated look for 2010.

Despite tweaks to the front end styling that have given a sharper edge to its looks and which help to better reflect its performance potential, the G37 will catch people’s eyes for its rarity rather than its good looks.

The Nissan-owned brand is arguably most closely matched to its Japanese counterpart Lexus, but it is pitched as a BMW rival to the Lexus’s Mercedes.

The quality of the finish throughout the cabin is generally very high, with only minor imperfections, such as the feel of some of the plastics.

With just 45 sales shared among Infiniti’s four-model range in 2009 (its first dealership only opened in Reading in September), drivers will be joining an exclusive club, but for the moment they need exclusive tastes too.

With no diesels available yet, the sports-focused G37 saloon offers a 3.7-litre 320bhp V6 engine that is good for a 0-62mph time of 5.9 seconds, sub-30mpg fuel economy and the highest benefit-in-kind tax rates.

Let’s be honest: this is not a fleet car. Until the diesel comes out later this year, there is little incentive for user-choosers to choose this car.

But on the plus side, early adopters do get a generous range of standard equipment, especially on the S specification, which has four-wheel steering, leather, 14-way powered driver’s seat, heated seats, parking sensors and unique alloy wheels, all for £33,500.

The price pitches it at the heart of BMW 3 Series M Sport territory and in residual value terms, only a couple of percentage points separate them.

On the road, the G37 has lots of grip, reasonable feel through the steering wheel and a competent chassis allow for confident high-speed driving on twisty roads. It’s not an M Sport challenger, however.

It’s best as a motorway cruiser, burbling away at a diesel-like 2,000rpm at 70mph in relative silence.

Not a fleet car – yet – but offers luxury performance that could give BMW a run for its money when diesels finally arrive.