MANY years ago, I was privileged to watch Peterborough United beat Arsenal 2-1 in the FA Cup. There were 33,000 fans crammed into Peterborough’s ground and us lads were put on the gravel around the edge of the pitch to avoid getting crushed. Exciting stuff.

But what made the day even more exciting was that I was taken to the match in my friend’s dad’s Mk II Jaguar – and it was an experience I’ve never forgotten. I had never been inside a Jag before – my dad didn’t even own a car in those days – and it was like walking into an old London gentlemen’s club. There was a distinct and wonderful smell of ageing leather and a good helping of walnut veneer all round. I was smitten.

And I’m still smitten with Jaguars all these years later and given the choice, I’d go for a big cat every time over its German prestige rivals. 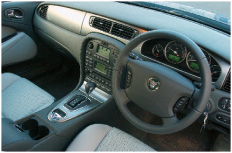 The S-type has been cleverly crafted to appeal to greying oldies like me. It looks just like a Mk II but updated for the third millennium and, inside, you’ll still find a quiet, upmarket ambience. But that’s where the similarities end.

This car sports a stonking 2.7-litre diesel engine and a host of hi-tech gadgetry which would have been unthinkable back in the Sixties.

I’ve been making the most of it by doing quite a few long distance journeys in complete and utter luxury. If there was ever a car built for gobbling up motorways miles, this is it.

There are a few grumbles, however. For starters, it’s rather like a Tardis in reverse – it looks big from the outside but there isn’t a lot of legroom inside. It also has a prodigious thirst for oil and, despite the fact that it bears a ‘Sport’ moniker, it will wallow like a basking hippo through the bends if you try pushing it hard.