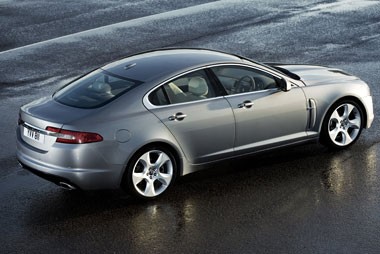 There’s something special about a Jaguar.

That badge brings with it a weighty responsibility forged by years of heritage as a prestige British carmaker.

There was a time when it failed to live up to expectations.

The X-Type was considered little more than a rebadged Ford Mondeo, while the retro S-Type was competent but the automotive equivalent of a nice sit down.

Then along came the XK coupé and everyone stood up.

Here was a new Jaguar that retained an air of heritage but injected something new. It was, perish the thought, a sexy Jag.

And now we have the XF. Can it continue the good work?

The design comes from the man who styled the XK and the Aston Martin V8 Vantage.

This is no bad thing, as the XF has some striking lines.

The bonnet bulges with muscular intent, although the headlights look out of place.

And while the grille looks good from a distance, up close it is disappointingly cheap-looking plastic rather than chrome.

Inside, the traditional mahogany and leather interior associated with Jaguar is long gone, replaced with some very nifty gadgets.

Press the start button and the air vents reveal themselves from behind the silver dashboard with a quiet whirr of motors, while the cast alloy gear selector knob rises slowly from the centre console.

It’s all very ‘oooooh’-inspiring, but a bit gimmicky.

Such extravagances are entirely non-functional, and I can’t help wondering how much they’ll cost to fix in 10 years if they go wrong.

And, for me, they fall just the wrong side of flashy, which is not what I expect from a Jag.

Under the bonnet is a 2.7-litre V6 twin-turbo diesel engine which develops 204bhp.

It takes the XF from 0-62mph in around eight seconds.

The engine feels strong but as smooth as caramel.

Mated to a six-speed automatic transmission, it’s more than happy to cruise the motorways but with a flick of a steering wheel-mounted paddle can be switched to manual mode.

Cog changes are fast and smooth and mean that the XF can be hustled along winding roads.

It’s no sports car and you’re always aware that it weighs well over one-and-a-half tonnes, but it remains surefooted.

For £33,635 you can get a car that manages to retain the classic aura associated with Jaguar.

Even if it does occasionally annoy you with unnecessary gaudiness, it’s guaranteed to turn far more heads than an A6 or 5 Series will.

The Jaguar looks expensive on paper but does come fully loaded with equipment and a smooth twin-turbo V6 diesel engine.

The Audi undercuts the others easily yet offers a V6 engine and four-wheel drive.

The Mercedes-Benz is in entry-level Classic trim, which is sparse.

The BMW and Audi have 17-inch alloy wheels and variable servicing intervals, saving money over their rivals in SMR terms over three years/60,000 miles.

The Jaguar costs nearly £400 more than the BMW in first.

With combined fuel economy of 43.5mpg, the BMW is well ahead when it comes to fuel spend.

The Mercedes-Benz just pips the Jaguar for second, with a fuel economy of 39.2 against 37.6.

The Audi returns 33.6mpg – its four-wheel drive hardware counting against it.

With its much lower front-end price the Audi performs well here, with CAP estimating it will retain 42% of its cost new after three years/60,000 miles.

The ageing E-Class will retain 37%.

Over three years/60,000 miles, the BMW is the cheapest to run, thanks to decent residuals, good fuel economy and cheap servicing.

Although the Jaguar is a much newer car than the BMW, it’s hard to argue with the savings to be had by opting for a 5 Series.

The Bavarian motor is the best to drive, but also boasts the best fuel economy, the cheapest servicing and a healthy residual value, as well as being easily the cheapest in tax terms for company car drivers.

The Jaguar and Audi perform well with strong RVs and reasonable servicing costs, as well as offering plenty of equipment as standard.

The Mercedes-Benz cannot compete financially – an all-new model is looming on the horizon next year.