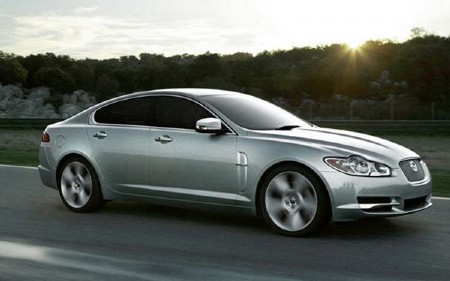 Jaguar doesn’t launch too many new cars in a year (or decade, to be honest), so it’s quite understandable that the marketing department has whipped itself up into a hoopla of excitement over the arrival of the new XF.

This is most evident in the promotional video I was shown prior to getting behind the wheel. I’ll save you from the waffle, but a quick example is this, paraphrased from memory: “The XF is warm and soft…”. Brilliant. But then, just a minute later, it was “cool and edgy”.

Perhaps they’ve gone a bit giddy because, for a change, they’re not having to come up with a way of expressing how the new front bumper on the XJ doesn’t look like it’s come from Halfords.

To be honest, all they really needed to say was: “The new XF – finally, we’ve got a car that doesn’t look like it belongs in the Sixties and that we’ve got a decent chance of selling.”

The XF, which goes on sale at the beginning of next month, replaces the ageing and aged-looking S-Type, a car that has never had the style, brand appeal or range of engines and body-styles to trouble the might of the Audi A6 and BMW 5 Series in the executive market.

In terms of style the XF certainly has plenty, with a sleek and modern look combining far more effectively with some historical cues such as the front grille (looks like metal, should be metal but is, disappointingly, plastic) and side gill air intakes.

It is only available as a four-door saloon and while there’s a choice of four engines, the majority (around 70%) will be the twin-turbocharged 2.7-litre V6 diesel.

Depending on your attitude to global warming, you can have petrols in three guises – V6, normally aspirated V8 or, if you truly don’t give a damn, supercharged V8.

Prices start at £33,900 for the diesel and all models come exceptionally well equipped.

Leather seats, a six-speed automatic gearbox, satellite navigation and Bluetooth mobile telephony are all standard – all of which are options on the equivalent rival A6 and 5 Series.

This, and limited volume of around 8,000 units a year, has helped push up residual value predictions – CAP has booked the XF 2.7D Luxury at 45% after three years/60,000 miles, with the petrols a few percentage points further back.

This sets a solid foundation for the car’s chances in the corporate market, which Jaguar expects to account for between 35 and 40% of sales.

Jaguar’s UK managing director, Geoff Cousins, said: “We’ve worked very hard to ensure that the specification level on the XF is right. Having items such as satellite navigation as standard equipment will help us ensure good residual values in three years’ time.

“The XF makes sense both emotionally and rationally.”

This is where it gets interesting because Jaguar has made a massive effort to ensure the interior of the XF is the best in class.

And, to be fair, it’s hard to argue against that claim.

First of all, the gimmicks – the starter button pulses red before ignition, which is intended to make you believe the car is alive.

Secondly, the air vents all appear from behind a metal-effect dashboard trim.

Thirdly, the gearbox is no more, replaced by a rotary button which rises from the transmission tunnel and works more like an iPod control thanks to drive-by-wire electronics which do away with any mechanical couplings.

All very clever, but what impresses most about the interior is the quality – stitched leather and wood mingle with metal veneers in a very cool way – think boutique hotel and you’re on the right wavelength.

Thankfully it’s not just style over substance, because the XF drives well. The diesel engine is refined and barely any engine or wind noise intrudes into the cabin, even at motorway speeds.

The gearbox shifts imperceptibly, the steering is direct and nicely weighted and the ride is comfortable.

All well and good, but Jaguar insists the XF is a sports saloon, but several factors conspire against it.

Firstly, compared to, say, a 530d, it just doesn’t feel as powerful with a distinct absence of that usual mass of low-down torque you get from a large capacity diesel.

Secondly, the gearbox conspires against the car. It doesn’t like being in second gear, preferring to change up into third and then let the car bog down.

This is most evident when you want to make a quick overtake but don’t feel as though you have the confidence.

As a mile-muncher the new XF excels, being quiet, refined and comfortable.

But as a sports saloon it is not as good as a 5 Series.

However, high equipment levels, sleek styling and strong RVs mean the XF can put up a strong business case.