LOOKING at Jaguar’s new XJ diesel, you wouldn’t imagine that it is at the cutting edge of technology.

From the outside the XJ is pure old-fashioned Jag, a traditional look which hasn’t altered dramatically since the early 1990s. The interior continues the theme, with lashings of chrome, wood and leather evoking images of classic British cars from the sixties.

So it’s hard to comprehend that under this retro-trad skin beats the heart of one of the most technically-advanced diesel engines in the world.

The twin-turbocharged 2.7-litre V6 is the result of a collaboration between Jaguar’s parent company, Ford, and the PSA Peugeot Citroen group.

It offers 204bhp and 321 lb-ft of torque available from just 1,900rpm, giving the XJ a huge helping of mid-range grunt which is traditional of any diesel engine. 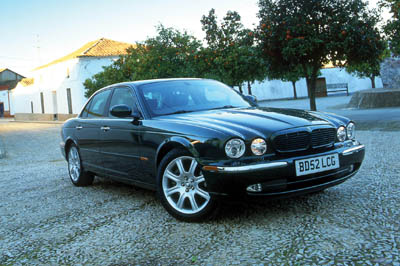 Jaguar has gone to great lengths to disguise the fact that this engine is a diesel, and it has succeeded. The TDVi features special engine mounts which are designed to virtually eliminate engine vibration while idling, extra insulation around the bonnet to cut noise and acoustic laminated glass which reduces wind and engine noise intrusion into the cabin.

It’s a bold claim, but one which is entirely true. This is the quietest diesel I have ever driven, and things get better once you’re on the move.

Because as well as not sounding like a diesel, it doesn’t drive like a diesel either, especially in the way it delivers its power.

Unlike other diesels, which have a narrow powerband which makes revving the engine to the red line irrelevant, the TDVi pulls up to its 4,500rpm limit, each time accompanied by an imperceptible upshift through the six-speed automatic gearbox.

But it’s not all good news. There is a delay in power arriving when setting off from a standstill – although this is more to do with an annoying inch or two of dead throttle travel rather than turbo lag, and the boot space is poor for a car of this size.

Unlike other rival luxury saloons which allow you to tailor the suspension to your preference, the Jaguar’s CATS (Computer Active Technology Suspension) decides on how the car should react.

And there are different set-ups depending on which trim level you choose. Executive spec gives a sporting ride and tighter handling, while the more expensive Sovereign errs much more towards comfort.

So if drivers want a soft-riding car then they will need to pay nearly £6,000 more for the Sovereign. But the standard car does a good job of blending the best of both worlds, and saves a whole heap of cash too.