In drawing one of the most beautiful cars ever built, the Aston Martin DB7, Ian Callum can take his place in the pantheon of great designers. So for him, coming up with the bumpers for this 2008 model year XJ must be a bit like Picasso decorating his bathroom.

But it had to be done, for the XJ needs a shot in the arm to see it through until the end of its life.

While other luxury saloons have become ever more monolithic and imposing, the traditional curving bodywork of the Jag is looking increasingly slight.

Callum was keen to give the car more presence, particularly from “200 metres away” in a rear view mirror. A driver should feel the same intimidation when a luxury saloon bears down on them as if the chief executive is sweeping up to their desk.

So the XJ now has a deeper front bumper with a lower grille. The actual metal hasn’t changed and you can see that there has been some financial stringency: the headlamp washers don’t fit flush into the bumper but sit on top like four painted peanuts.

Along the sides, all cars now get “power vents” that were first seen on the new XK, then on the XJR Portfolio special edition and will now appear on all new Jags. Callum has also added mouldings to the bottom of the body to give the car a more slabby profile.

At the back there’s another new bumper, some different exhausts and a strip of chrome, but it’s all a bit of a token effort.

The question is, have these rather clunky exterior changes fixed a car that wasn’t broken in the first place?

There’s no doubt the XJ is still a wonderful car to drive. The ride is second to none, while it feels taut and sporty without requiring too much effort from the driver.

The 2.7-litre twin-turbo diesel is still the pick of the range. The engine may be smaller than those fitted in the Mercedes-Benz S-Class and BMW 7 Series, but the relatively lightweight aluminium body makes up for it.

There are new seats in the 2008 model, but as the old ones were fantastically comfortable and supportive I couldn’t really tell the difference. But they now come with the option of cooling fans like a proper luxury car while their design apparently frees up a few extra centimetres of rear legroom.

The XJ is a unique proposition in the luxury sector. It offers a more intimate experience than other luxobarges, and while a couple of new bumpers are not likely to attract many new buyers from the German brands, it should keep XJ fans happy. 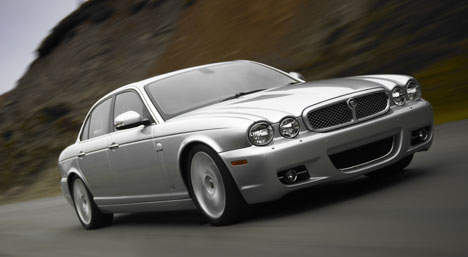