Back in the first report on our Jaguar said I would be flying the flag for the XJ6 to ensure it didn’t get forgotten as buyers swoop on the lauded new diesel.

Well, last week I got the opportunity to try petrol and diesel versions back-to-back, and it threw up some interesting comparisons.

To start with, the diesel is wonderful. It is quiet, refined and not lacking in performance, despite 2.7 litres seeming rather a miserly volume in the luxury car sector, where a 3.0-litre diesel is the bare minimum.

That the XJ is not overwhelmed is thanks in part to the light aluminium body it has and the twin turbos boiling up 204bhp.

It also felt marginally quicker than our 3.0-litre V6 petrol, even though their 0-62mph times are very similar at around eight seconds. The diesel’s mid-range grunt is certainly impressive.

There’s a big but though, and it relates back to my immediate impressions of the 3.0 V6. No matter how good the diesel is, it doesn’t have the soul of the petrol.

And Jaguars are all about soul, a point which has been rammed home by the XJ6. I’ve said before how great the engine sounds but the detailing in the car also marks it as something special. There isn’t much Ford parts-bin picking going on here.

You only have to look at the thick chrome door handles, the lustrous black instrument panel or the deep, chrome ringed instrument cowlings to show it has had love as well as logic lavished on it during its development and manufacture.

Also, our car is fitted with sports suspension, while the Sovereign version of the XJ diesel I drove last week was on softer settings.

Compared to the taut handling of the XJ6, the diesel felt all at sea. That’s great for somebody who wants to drift along in a cosseting world of leather and walnut, but many drivers opt for an XJ because they like sporty handling. In which case, sports suspension is an absolute must.

The steering is extremely direct for a car of this type, throttle response is instant and the body stays poised over all surfaces. It feels very sharp, a feeling enhanced by the big 19-inch wheels ours is on.

Jaguar has had a poor reputation for reliability among the premium manufacturers over the years but our car, key fob malfunction aside, has run like clockwork.

It hasn’t needed any oil, there is not a single rattle or groan from anywhere and after more than 13,000 miles still has the rigid feel of a brand new car. 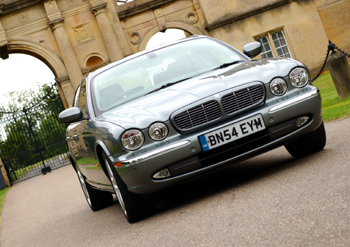