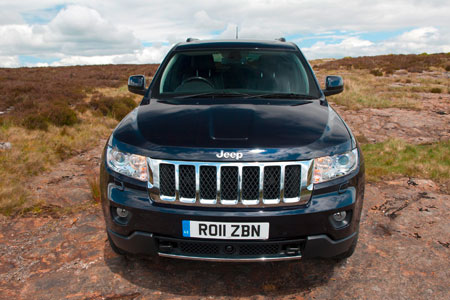 Jeep has always laid claim to defining the modern 4x4, although Land Rover got there first when it came to taking these vehicles upmarket with the Range Rover.

The first Grand Cherokee was launched in 1993 when Land Rover was about to launch the second-generation Range Rover, and its American rival was never really seen as having the same luxury status.

However, the Grand Cherokee was always a smart alternative to cars like the Mitsubishi Shogun and Toyota Land Cruiser, and latterly – under the DaimlerChrysler alliance – its V6 Mercedes-Benz engine made it a little more sophisticated.

But those days are long gone and now Jeep is under Fiat stewardship.

The fourth-generation car is all new and comes with a new V6 diesel that’s a little more efficient, if not threatening to beat European SUVs on CO2 emissions.

But Jeep doesn’t really do SUV with the Grand Cherokee – it’s more an upmarket car with authentic 4x4 credentials.

And there’s an interesting background to how it came by its new diesel engine.

A few years ago when General Motors was trying (for the third time?) to launch Cadillac as a premium brand for European customers, it knew it wouldn’t succeed in carrying off the premium label without a six-cylinder diesel.

It owned a 50% stake in Italian diesel engine specialist VM Motori, and set the ball rolling in getting a V6 diesel for Cadillac. But it never got that far. The ‘big three’ US car manufacturers were in crisis and haemorrhaging money in Europe. A big diesel for Cadillac was ditched and Fiat ended up securing a stake in Chrysler (Jeep’s owner) as well as GM’s stake in VM Motori.
So the engine originally destined for Cadillac ended up in the Grand Cherokee and the latest Chrysler 300C.

And it’s a sweet engine, even if CO2 emissions are the wrong side of 200g/km (although competitive with Land Cruiser and Shogun, and a little better than the Land Rover Discovery) with 237bhp and a hefty 405lb-ft of torque.

The interior of the Grand Cherokee is also much improved, with a proper premium car feel, perhaps not quite there with European rivals, but closer than ever.

How it behaves on road is also a revelation: gone is the vague steering from the previous version and it’s also far more resistant to body roll.

It still feels a little top heavy and won’t worry BMW and Mercedes-Benz, but it means you can drive briskly on twisty B-roads without fearing for your safety.

Being a Jeep, it’s capable of some tough tests off road, too, and comes with Jeep’s own version of Land Rover’s innovative Terrain Response for when work requires the Grand Cherokee to travel on tracks or on routes without any hint of a road.

While it might not set any benchmarks, it’s by far the best Grand Cherokee yet, will work hard if needed and won’t feel like a downgrade from an established premium brand.

Jeep has waited for the facelift of its Compass SUV to introduce a plug-in hybrid, with the combination boosting its fleet credentials significantly.