The Picanto is one of those fortunate little cars that has always seemed right. Right size, right price, right image, right spec.

So it’s no surprise that Kia has sold around 38,000 of them since it was launched three years ago.

And it’s no surprise that halfway through its lifespan comes the facelift.

There’s a new grille, front bumper and bonnet that are intended to give the car a family look more like the Carens and Cee’d, as well as more characterful headlamps and a minor redesign to the rear.

The previous three-model line-up has been increased to six with the introduction of a launch model, called Ice, and an automatic version, while the standard range has been simplified to entry-level Picanto, Picanto 2 (plus an auto) and Picanto 3.

Inside, the lacklustre grey plastic and seats have gone in favour of more swanky black.

The facelift coincides with a change in strategy for the car.

In 2006, the Picanto was the UK’s fourth-best-selling A-segment car. Kia is now doing less fleet (mostly daily rental) sales as part of a plan to concentrate on retail sales.

Once you adjust to the incredibly high and light biting point of the clutch and the sharp bite of the brakes, the Picanto is a rather whizzy thing. 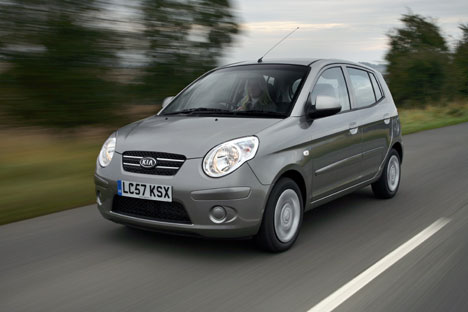 The 1.1-litre engine is never going to blow your socks off, but it does its job without being too raucous or wheezy.

The gearbox is light and accurate, as is the steering, and even a big old galoot like me could get a relatively comfortable seating position thanks to the now standard adjustable height on the driver’s seat.

The all-black interior of the Ice model lends the Picanto an air that, while difficult to call classy, is certainly good quality for its sub-£7,000 price tag.

The instruments are all of a meritorious standard and for the first time the Picanto comes with integrated stereo system, due to RDS finally being fitted by the Koreans.

The Picanto was always a good, cheap car to run and the changes have made it an even better proposition.