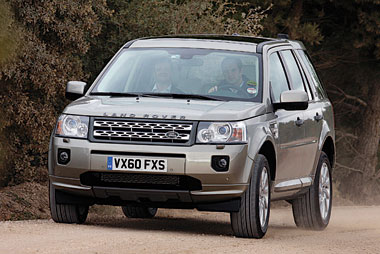 There has been a noticeable shift in buying habits in the compact SUV sector in recent years, and some of it has been driven by fleet policies.

Even user-choosers are restricted to vehicles with CO2 emission limits on some fleets, while some organisations have also taken four-wheel drive cars off choice lists.

Perhaps the most famous 4x4 brand has survived on its reputation for go-anywhere vehicles, and the decision to offer two-wheel drive was not taken lightly.

And so Land Rover launches ED4 versions of the Freelander, with power only being delivered to the front wheels. With 150bhp from its 2.2-litre engine, as well as a surprisingly hefty 309lb-ft of torque at 1,750rpm, the front-wheel drive Freelander is the most efficient production Land Rover to date.

CO2 emissions are 158g/km, while economy is 47.1mpg on the combined cycle, also helped by a stop-start system.

According to Land Rover’s head of corporate sales, Jon Wackett, the ED4 could put Land Rover back on many user-chooser lists, and he says his team has identified 400 organisations that had banned 4x4s and could now consider including the car.

On road, the Freelander impresses the more time you spend behind the wheel. Its engine is refined and the seats comfortable.

It is a necessary model for the company to ensure it retains a presence on fleets alongside other premium SUVs.

As most drivers never venture off-road, the lack of four-wheel drive will not be an issue.