ABOUT this time last year, I spent two days being rather underwhelmed by the new Lexus IS diesel.

I thought it was slow and unrefined and way off the pace of the competition in the sector. So here I am, a year later, running one as a long-termer and hoping I will be struck by Stockholm Syndrome, whereby enforced captivity eventually morphs into idolatry for your captor.

And the Symbionese Liberation Army to my Patti Hearst is to be a sexy black Sport model.

We felt one of the key failings of the standard 2.2-litre diesel was the spacing of the gears. There are a couple of flatspots that make it feel unnecessarily sluggish for the 175bhp on offer.

The Sport model comes with revised, shorter ratios in the gearbox that hopefully will make the most of the available torque from the engine.

The diesel IS has kickstarted Lexus in fleet. Its previous showing was down to a few petrol-only ISs, GSs, RXs and LSs, but this car has given company car drivers a Lexus with a more competitive financial proposition. 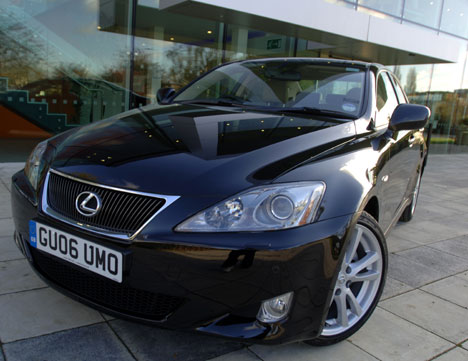 If low tax is the key drive for a driver, then the standard IS has emissions – if not performance – much more in line with the competition.

As a result, Lexus fleet sales are up 88% year-on-year. It’s still a niche player, having sold just over 7,000 cars in fleet, a total that also includes the likes of the hybrid RX and GS.

But the IS range takes the majority of those sales and things are generally going in the right direction.

At launch, Lexus’s conservative target was to sell 7,000 ISs a year, with 70% going to fleet, a target the firm might just meet by the end of the year. These small volumes are keeping predicted residual values fabulously strong. CAP puts the diesel IS at the top of the executive sector.

While the volume sales approach has started to suppress residuals for the A4 and 3-series, and the Mercedes-Benz C-class is suffering a natural fate as it is about to be replaced, the IS is predicted to sit at around the 43-44% mark after three years/60,000 miles. That’s two or three percentage points better than the next best, the 3-series.

The IS is also the best-looking car in its class. It is a sexy, athletic-looking saloon, especially in the shiny black paintjob ours has, with its standard 18-inch alloy wheels.

The interior is less successful, mainly due to the beige Alcantara trim which, although the car has only done 5,000 miles, is already looking pretty sorry for itself and in this colour looks like poor man’s cloth seats.

It marks really easily and in fact looked grubby when the car was delivered with about 3,500 miles on the clock. I’m sure a visit from How Clean is your House TV stars Kim and Aggie and their fur-lined Marigolds might be needed after 60,000 miles. 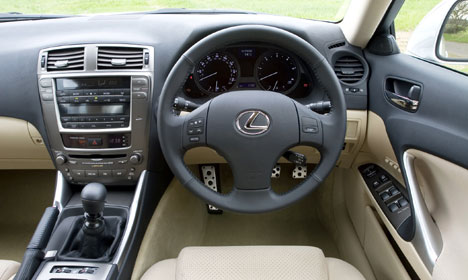 Better than calling in those two Brillo-bearing battleaxes might be to opt for the darker grey or black cloth in the first place. Amazingly, leather isn’t available, even as an option.