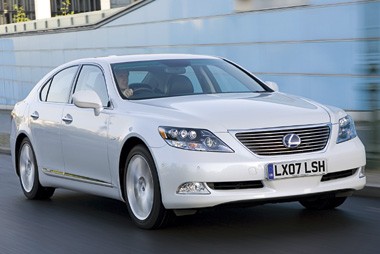 Let’s, for a moment, forget the argument about whether a hybrid car really is as green as it is made out to be.

And let’s, just for a moment longer, forget about the crippling price rises in petrol and diesel, and the underlying general economic malaise in this country.

Instead, let’s celebrate the fact that Lexus has dedided to throw everything it knows about cars, as well as the kitchen sink, into its flagship model.

The LS600h is a staggering piece of equipment with several key aspects.

Firstly, it’s powered by a 5.0-litre V8 petrol engine which, with some help from the built-in electric motor, delivers 439bhp (the 600 in the name refers, according to Lexus, to its performance credentials being more like a 6.0-litre engine).

It’s got four-wheel drive, a list of standard equipment which would be alien to the driver of a similar German-made machine, and most impotantly, it is the first Lexus to have a real presence on the road.

This isn’t difficult, you may say, what with the LS being a bloody great chunk of metal, but its predecessors lacked the visual clout to turn heads.

This new model does, thanks to a prominent chrome grille and Germanic proportions.

Inside the huge cabin there’s the usual mixture of leather and wood, although the dashboard still isn’t up to the standard of the competition in terms of materials used and design (there’s a staggering array of buttons to press, which is at odds with the current trend for minimalism in this sector) – if you’d paid £80,000-plus for this car, you’d be disappointed with your view from the driver’s seat.

However, the majority of people who buy this car will have a chauffeur, and the view from the back is much better.

Our test car came in long- wheelbase form with aircraft-style reclining seats (taking the price above £90,000), but even in standard guise there’s masses of leg and shoulder room, plush leather seats and a whisper quiet ride, allowing the passenger to concentrate on the Financial Times while being whizzed into the office.

The refinement of the drivetrain is extraordinary, with silent engine running (unless you floor the throttle and then the V8 engine bellows), no wind noise and seamless shifts from the automatic gearbox.

There’s a reassuring heft about the LS – it looks and, more crucially, feels very solid.

The LS600h is an awesome car, and certainly the best car Lexus has ever built. It’s lavishly equipped, clever, exclusive and handsome.

But, and there’s always a but, we have to do the vulgar thing and talk about money. At this point the Lexus loses some of its shine...

Wow – Mercedes-Benz in value shock! It’s not often it’s cheapest, but this is extraordinary company.

At under £60,000, the long wheelbase S-Class looks good value. The Lexus is very expensive, with the hybrid commanding a £24,000 premium over the ‘stock’ petrol LS460.

The S-Class is second, thanks to variable service intervals and 17-inch alloy wheels.

Despite running on 20-inch alloys, the Range Rover’s 15,000-mile service intervals make it the cheapest over three years and 60,000 miles.

The hybrid Lexus returns a claimed 30.4mpg, the Audi 30.0mpg and the unaerodynamic and heavy Range Rover 25.1mpg.

Big cars have always lost big money, and these four are no different.

The S320 performs the best, with CAP estimating it will retain 39% of its cost new after three years/60,000 miles.

The Lexus will retain 33% – but its much higher front-end price means a huge depreciation hit.

The S320 CDI costs the least to buy at the front end and leads the way in all but one of the wholelife cost sections.

Its massive advantage in depreciation seals a comfortable win from the Range Rover.

The Lexus will cost nearly £20,000 more to run than the Mercedes-Benz.

Common sense would dictate that the Mercedes-Benz S-Class is the logical choice, with its mixture of style, brand appeal, engineering and running costs.

But at this price level, common sense can take a back seat.

Lexus has effectively blunted the LS600h’s chances by demanding such a hefty price premium for the hybrid technology, but if your managing director has a serious dose of eco-guilt and wants a hybrid to do his bit for saving the planet (however misguided this idea may be), then there is just one choice – and what a choice it is.