By all accounts, it was instantly forgettable.

I had to Google it to remember what it looked like.

But in the time it took to click from internet browser to word processor, I’d forgotten again.

Thankfully, its replacement, also called the Mazda2, is a rather pretty little thing.

Mazdas of late have all been rather stylish in their own way, and I think the 2 is possibly the best looking of the lot.

It manages to pull off “cute but sporty” in a way that these days, hampered by safety concerns and ‘experimental’ designers, few vehicles seem to get right.

This is an instantly good start for Mazda, as in the supermini market, cute is good.

Which is perhaps why you don’t see many old model Mazda2s on the road – whatever it was, I’m sure it wasn’t cute.

Speaking of on the road, hopes have been high that the new 2 will be as good to drive as it is to look at, based as it is on the forth-coming new Ford Fiesta.

The Blue Oval has an enviable reputation for making cars that are fun, and the chassis on the 2 is excellent – nippy and firm around corners without having a boneshaking ride.

The same can’t be said of the steering, unfortunately.

It’s nicely weighted, but rather vague, which gets annoying on twisty roads where the initial degree of steering input requires little corrections all the way around the bend.

It’s just too hard to tell what’s going on with the front wheels, a problem highlighted all the more by the quality of the chassis.

Power in the car tested comes from the middle petrol engine available – the 1.3-litre with 85bhp.

The petrol engine tested certainly sounds the business, and around town is rather peppy, but once opened up is lacking mid-range power and needs to be revved senseless to get any decent performance out of it (62mph from standstill takes the best part of 13 seconds).

This tends to dent the official fuel consumption figures of 52.3mpg.

All the engines are mated to a five-speed manual gearbox, which is excellent – a snappy, short shift with a simple, ergonomic gear knob.

However, the lack of a sixth gear means that motorway journeys are sometimes rather loud.

The driving environment is perfectly decent.

The dash is very similar to those of other Mazdas, which isn’t a bad thing but means there’s little to get excited about.

The design is clean but unadventurous, and while the plastics used are a bit on the scratchy side, they feel solidly assembled.

So, there’s a lot to like in the new Mazda2.

My only other quibble is that the steering wheel doesn’t adjust for reach, which is almost unheard of these days. 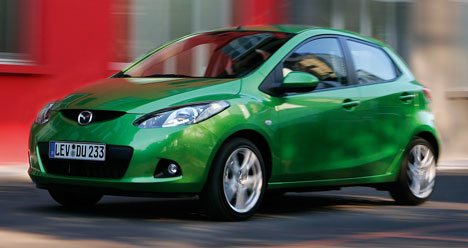 This is a car that deserves to succeed – it looks good and handles well, which should be enough to ensure that it stays in people’s memories this time.