A PROBLEM with our Mazda5’s suspension system recently gave me the chance to check out the efficiency of our local Mazda dealer in Peterborough.

The front suspension began sounding like a loose bag of spanners when it ran over bumps. On potholes or speedbumps, it rattled, creaked and groaned as though it was on its last legs.

Thorough, but very amateur, checks underneath the engine bay revealed nothing untoward, so I felt that a visit to the dealer was in order.

It was at this point that company car driver syndrome struck. One of the biggest problems facing fleet managers is getting staff to have their cars regularly serviced, fix problems and even do simple things like top up the oil.

For hassled drivers, where urgent business appointments fill their days, finding the time to get to the garage can be a nightmare.

So as I returned to the office at 3pm recently from a business trip to London, I thought I should make the most of the day and visit the local dealer to ask when they could book my car in for a check-up. 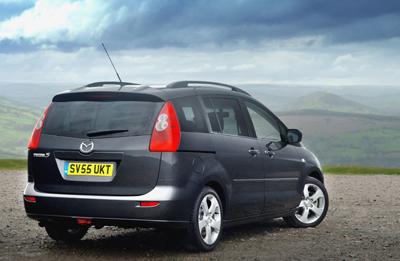 I rolled up at the service desk and explained the problem, expecting lots of drawn breath and tutting over a calendar as a service date was searched for.

Instead, the service engineer explained it was a simple problem, related to a loose or unlubricated roll bar, took the keys off me and said it would be ready in two hours. And after flicking through a few magazines, the Mazda5 reappeared from the service bay rattle-free and ready to go.

I couldn’t have been more chuffed, as my off-chance decision to pop in had saved me a huge amount of time and allowed me to experience some of the best customer service I have received from a dealership.

Other than this unplanned pitstop, the Mazda has been exceptional for its lack of drama. The sliding doors are proving a big hit with all family members, especially in tight parking spaces.

Fuel economy is sticking to the 31mpg mark, despite my best efforts. As an experiment, I put in a couple of tanks of super unleaded, with the promise of ‘25 miles more per tank’ but it made no difference whatsoever.