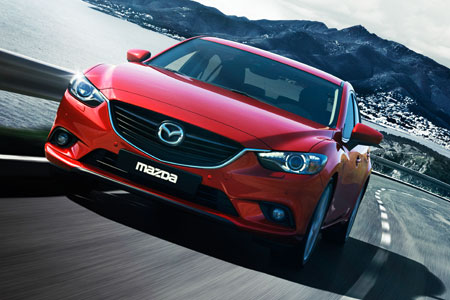 It’s 10 years since Mazda surprised us with the first Mazda6. It was remarkable not because it was good value for money and was roomy and reliable, but because it was a great-looking car that injected some much-needed fun into the upper-medium sector.

The 2002 Mazda6 heralded the company’s ‘zoom-zoom’ advertising campaign, and with a steering rack lifted from the sporty MX-5 roadster, it offered the sharpest drive of any car in its class.

Its replacement in 2007 promised more of the same, but it wasn’t as dramatic a departure from what went before and by this time, the fleet market, where Mazda had enjoyed some success with the original Mazda6, was more vigilant about CO2 emissions and overall running costs. Fleet interest dwindled.

Now there’s a new Mazda6 that not only has the sleek looks of a concept car, it also has attention-grabbing low CO2.
Cars we drove recently on an early test had CO2 emissions of 108g/km for a 150bhp 2.2-litre diesel, giving it a clear performance advantage over low-CO2 diesel upper-medium cars, such as the Peugeot 508 e-HDi or Volkswagen Passat Bluemotion.

But Mazda says that from April 2013 production, the CO2 emissions for that model will be reduced to 104g/km, giving it a benefit-in-kind tax band advantage over its less powerful rivals. That’s also equivalent to 72.4mpg on the combined cycle, making the Mazda6 the only non-hybrid D-sector car to exceed 70mpg.

Other models in the range are not quite as impressive, but still noteworthy: the manual 175bhp diesel achieves 119g/km (autos for both diesels are a little higher); while 2.0-litre petrol versions are all below 140g/km with the 145bhp manual at 129g/km.

Further fuel efficiency has been found through its i-E loop energy recuperation technology.

The Mazda6 has changed very little in its basic design from the Takeri concept car shown at the Geneva Motor Show in March 2012.

Inside the Mazda6 has a much more upmarket feel with nicely-designed switches and white LED displays and white-on-black instruments. It feels very much inspired by an Audi interior.

There will be a choice of SE, SE-L and Sport equipment grades, although on the diesel variants sport will be offered only on the high-power engine.

Our short test route was a little disappointing as we didn’t really have an opportunity to feel the benefits of Mazda’s Skyactiv philosophy where weight reduction makes the car more engaging, but that will come when we get an opportunity for a longer drive early next year.

Noise intrusion from the diesel engine was a little excessive compared with rivals but, as an overall package, the new Mazda6 seems promising and should revitalise interest in the brand just as the original did 10 years ago.