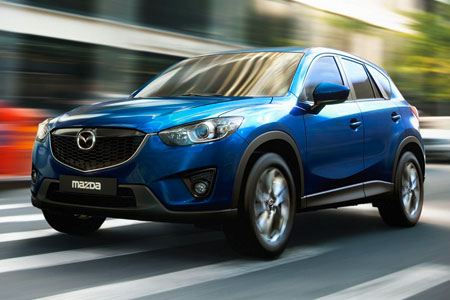 The CX-5 crossover marks the start of a new era for Mazda and it could be the most critical point in its history.

No longer tethered to Ford for product development, the manufacturer’s new era is meant to be one of innovation and leadership.

Its new products, starting with the CX-5, have been developed under the Skyactiv banner – using reduced weight and building in greater efficiency to conventional powertrains rather than investing in alternative fuel vehicles.

Even if the most optimistic sales predictions for electric vehicles are fulfilled, it would still mean 90% of us choosing new cars in 2020 would be refuelling with petrol or diesel.

Therefore, the petrol and diesel engines powering the CX-5 and future models have been optimised for fuel efficiency, even to the point of changing the compression ratios so they are well out of step with typical road cars.

The bottom line with our test car is a 175bhp diesel car, with the extra traction of four-wheel drive, producing 136g/km of CO2 and 54.3mpg on the combined cycle.

Compare that with the latest rival from Ford: it’s four benefit-in-kind tax bands lower than the Kuga, while for a four-wheel drive Nissan Qashqai to match its company car tax band, you’d have to choose a 130bhp 1.6-litre model.

The CX-5 impresses on paper, and is a lively performer on the road. Steering feels direct without some of the numbness that afflicts many with electric systems.

The CX-5 always behaves as if it’s an extension of the driver. Body control is exceptional for a car so tall and its 309lb-ft of torque makes acceleration feel effortless.

Every Mazda CX-5 is equipped with ‘Smart City Brake Support’ (SCBS), which helps a driver to avoid a low speed (up to 19mph) frontal collision by activating the brakes and reducing the engine output, if the system detects a frontal collision is likely. This feature has resulted in new, lower insurance group ratings being applied to the car since October 2012.

The CX-5 has all the ingredients for success. But Mazda will need to repeat that with its mainstream Mazda6 and next-generation Mazda3 models to ensure it regains its appeal with fleets and drivers.