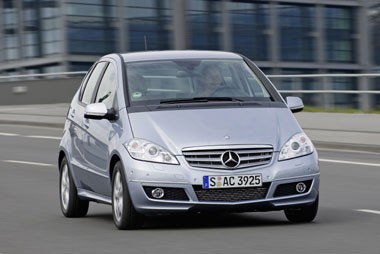 So far this year, the Mercedes-Benz A-Class is having a rather jolly time of it in fleet, with sales up by a fifth.

By the end of May, more than 2,000 had been registered – the same as the number sold in the retail market.

A somewhat surprising statistic perhaps, and hardly vast volume, but illustrating that in general company car drivers are thinking smaller and more practically.

The A-Class has always been a hard car to characterise, being neither hatch nor MPV, but its offering of trim dimensions with airy interior space, and a premium badge, certainly has its attractions.

For those yet taken in by its charms, perhaps the new model may prove alluring, although they will have to be susceptible to a most subtle form of seduction.

So, what are the differences between the new car and its predecessor?

It may sound an exhaustive makeover. In the metal, it’s not.
Inside, there are some new fabrics, trim and chrome surrounds on various models, but the main change to all models is a new-shape cupholder.

Also now, the brake lights blink furiously in the event of a heavy stop or manoeuvre, while all A-Classes are now fitted with Crash Responsive Emergency Lighting, where the interior lights come on after an accident.

Of most use to fleets could be auto park and stop-start. Together they make a useful package of urban driving aids.

Auto Park Assist costs £550 and identifies a parking space big enough then, with the engagement of reverse, spins the wheel itself until it has snuggled into the spot.

Auto Stop Start comes only on A150 and A170 petrol models, which is a shame as diesel drivers like to save fuel too. Mercedes-Benz engineers were keen to stress that theirs stops-starts smoother than a certain close rival’s.

Personally I couldn’t tell the difference and would be more concerned with the unnecessarily strong vibration emanating from the still-running diesel models.

But the A-Class still whizzes about happily either in town or on the open road and belies its high sides through corners by being composed.

You can see why the A-Class is a fairly popular, small-ish, car. It’s not really one thing or another, which means it is out of orbit of many people but, for the chosen few, it does a nice job.