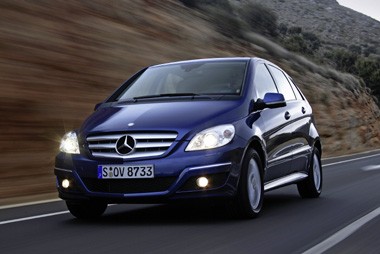 Some of the more unkind wags have suggested that the B-Class exists because the A and C do and somebody in Stuttgart though it was a nice logical thing to join the dots, alphabetically speaking.

Certainly, the B-Class does cause a certain amount of puzzlement about its role, which perhaps has less to do with its own shortcomings than the fact that the A-Class does a very fine job of pretty much the same task already.

However, enough have seen merit in the extra couple of hundred litres’ boot space and a smidgeon more interior flexibility to see 325,000 sold worldwide since its launch in 2005.

Compared to the A-Class’s subtle makeover, the B-Class has received more of a spit and polish, and for the better.

Gone are those bulgy eyes that stood in for headlights, to be replaced by slicker lamps, while the grille is much more pronounced, giving the car a much less glum appearance.

This new, more articulate, confident look is segmented by a larger, lower front grille and wider-looking bonnet, while it also benefits from a car wash-compatible shorter aerial and revised cupholder.

As with the A-Class, the B-Class is now replete with hill start assist, flashing brake lights and emergency lighting.

Optional is the reverse parking system – a brilliant thing for some, but an affront to their manhood for others.

The B-Class is a pretty uninspiring drive.

Add to that a group of engines built for economy rather than enjoyment and you have a vehicle as close as Mercedes-Benz gets to a utilitarian workhorse, vans excluded.

Economy has been improved for the diesel models, so that the combined fuel consumption of the B180 CDI and B200 CDI has dropped by up to 7%, depending on what tyres are fitted.

At nearly £19,000 for the cheapest model, you’ve got to desperately covet that badge to want one.

If you must buy one then at least buy the entry-level model.