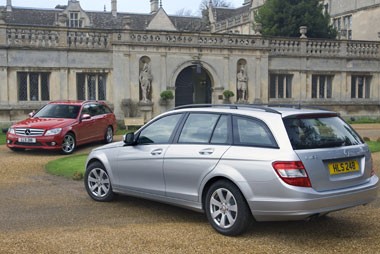 We’ve been very impressed by the new Mercedes-Benz C-Class saloon and now the range has been widened with the arrival of an estate model.

Priced at a £1,200 premium over the saloon, the estate model offers more load space and versatility but retains the car’s handsome, chunky looks.

So the Mercedes-Benz boasts class-leading boot space over its closest rivals, and has raised its game in other areas, too.

Cabin quality is much improved with a real feeling of solidity, combined with a healthier list of standard equipment that includes standard Bluetooth telephony – a nod to the increasing importance of fleet to Mercedes-Benz – and a raft of safety measures including the Pre-Safe crash mitigation system.

There’s also an electric tailgate, operated via the key.

The engine range is improved, including the C200 CDI diesel which is the subject of this test.

It is essentially a detuned version of the C220 CDI, offering 136bhp and CO2 emissions of 157g/km.

While the C220 CDI Sport will be the most popular model in the line-up, Mercedes-Benz is keen to push the C200 CDI with a manual gearbox among fleet customers.

C-Class product manager Nick Williams said: “We will be focusing on the fleet area as well as looking for a younger, more dynamic audience.”

Everything from the rear seats forward is an exact replica of the architecture of the saloon, which means room for four adults, solid build quality and decent specification.

It’s at the rear where things have changed most, with a large boot area accessed via a low loading sill.

Along with the electric tailgate this means loading and unloading will be very easy.

However, once it’s up to speed the engine is refined and flexible – it doesn’t need multiple downchanges to stoke it back up into the powerband.

The manual gearbox is the car’s weak link, sometimes refusing to engage a ratio cleanly.

However, when it’s in the mood the throw and change are both adequate.

And in SE trim the C-Class rides beautifully, absorbing bumps with little fuss while also retaining some degree of sharpness during cornering.

The C-Class Estate is handsome, well built and drives well.

With the largest boot in the class it is also the most practical.

Drivers will appreciate the three-pointed star’s cachet while fleet managers will like the residuals.

This addition can only build on the saloon’s fleet success.