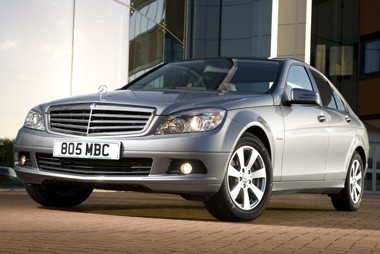 BlueEfficiency is, rather confusingly, Mercedes-Benz’s name for its eco sub-brand. And while the name may not automatically be associated with being green, the savings it offers to drivers and fleet managers certainly is.

There is also a dash-mounted economy gauge and a shift indicator light to alert the driver to the optimum point to change gear to maximise fuel economy.

The C180K is, so far, the only C-Class to be offered in BlueEfficiency trim, powered by a supercharged 1.6-litre petrol engine delivering 156bhp.

Further models will follow later this year when the C-Class diesel models adopt the 2.2-litre engines from the recently-launched E-Class range.

But for now the C180K is not only the sole BlueEfficiency model, it is also the cheapest to buy at £22,350.

It replaces the previous model, which carried the same name, but offers a host of improvements which make it an all-round better package, and at the same price.

The BlueEfficiency model has the same power output (despite the engine downsizing by 199cc), but fuel economy rises by 11% to a claimed 44.8mpg average. CO2 emissions fall by 18g/km to 149g/km.

As a result, a 40% taxpayer’s benefit-in-kind tax bill falls from £156 a month to £126. And for companies who outright purchase their fleet, the emissions reduction sees this model drop well under the 160g/km threshold for increased writing down allowances.

Running costs also fall, with the BlueEfficiency version being just over two pence-per-mile cheaper to run over three years and 60,000 miles.

Also reassuring is the high level of safety features fitted, with a host of systems helping the car to a five-star EuroNCAP test result, including adaptive braking, driver’s kneebag, crash-responsive Neck-Pro headrests to reduce whiplash and Pre-Safe – a series of devices which react if the vehicle senses a crash and takes action to reduce the likelihood of injury, such as tensing the seatbelts and closing the windows.

On the road the 1.6-litre supercharged engine feels surprisingly strong and revvy for such a small unit, while the six-speed manual gearbox has a much improved action, shifting betwen ratios smoothly.

Mercedes-Benz has enjoyed huge success with the new C-Class, and the arrival of the new Blue-Efficiency version will enable it to adjust its model mix, which has been reliant on diesels. The C180 brings useful savings to both company and driver while offering a safe and stylish package.