The Mercedes-Benz CL has always conjured up images of rather unhealthy, gauche largesse.

A bloated and ostentatious coupe like the previous CL, the size of a limousine, powered by a vast engine just doesn’t make a lot of sense unless you are the type of person who thinks in a slightly abnormal, chintz-laden and moneyed way to the rest of us.

But the new one, still a very grandiose motor car, is a slightly more subtle beast – and considerably sleeker and better looking. If the last iteration was the Mock Tudor mansion, then this is the Sunseeker yacht. 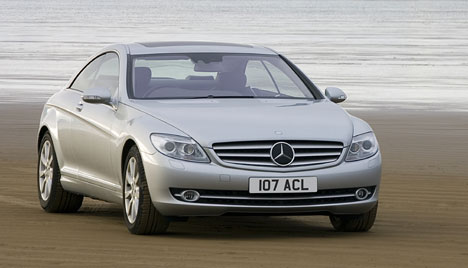 With an entry price of nearly £80,000 the CL is unashamedly exclusive. Ask Mercedes-Benz whether there is likely to be a diesel model in the future and the response is a abrupt ‘no’. Something sensible like diesel in a car this imprudent? Never.

And what will the likes of Mr Gerrard and Mr Lampard be getting for their weekly wages?

Well, an interior to die for, for a start. It makes the S-Class look workmanlike. The sweeping, smooth wooden console has hardly any buttons at all. Everything is discreetly tucked away, either behind flaps or in a digital world. The leather used seems to have organically enveloped the interior.

The two rear seats are amazingly hopeless for a five-metre-long car, but then you’d use the Rangie for transporting the servants and dogs, wouldn’t you?

There is also a vast amount of class-leading safety kit in the CL – brakes that will apply themselves automatically if a crash is imminent, the brilliant Distronic Plus cruise control which will bring the car to a halt and start it up again, intelligent lights which adapt the beam to the type of road you are travelling on, and Night View Assist, which uses infra red to give a view of the dark road ahead.

You don’t own the road in a CL. You buy it up and spit it out. Any of the three engines will propel you along at pace, but the real skill of this car is the incredibly poised way it deals with travelling at speed.

Like any big Merc, it will waft along silently and comfortingly, but when you try to lose the proles, the Active Body Control hydraulic suspension keeps all deportment stately and you can end up travelling at some silly speeds with no real idea that you are.

And of the three, the poor relation 500 manages 0-62mph in 5.5 seconds and in-gear acceleration is equally entertaining so it’s fair to say you’re not that poor in it. The 63 is sportier, with an AMG styled interior, and makes the dash to 62 in a second less. The 600 is about the same ridiculous pace but more luxurious and cosseting.

This is daft – these three cars have to be driven to be believed.

These cars make no sense at all. They are vastly expensive to buy, hugely costly to run and are large and showy and barely big enough for four adults. They are ridiculously, barmily brilliant.