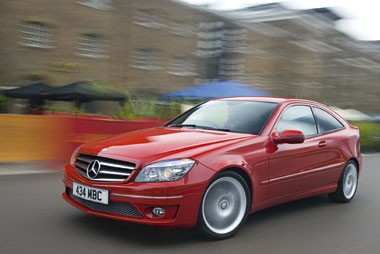 With Lewis Hamilton whizzing around racetracks faster than everybody else in his silver car while his Pussycat Doll girlfriend waits in the pits with his new friend P Diddy, surely there must be thousands of young executives out there thinking that perhaps Mercedes-Benz might finally be worth a look.

At the higher end of the market, those who wouldn’t know their pussycat from their diddy have always trusted their Mercedes-Benz to provide comfy, luxurious transport from golf club to Rotary Club and home again.

But among the younger generations, it’s a brand that has barely registered. So Mercedes-Benz is hoping that the revamped Sports Coupé, now called the CLC, will give them a share of the user-chooser market.

Why should this matter? Well, previously Mercedes-Benz was not especially fussed about capturing buyers at a younger age because it was safe in the knowledge that as those buyers got older, they would get over their dalliances with the likes of Audi, BMW and Volkswagen, and mature into fine, expensive Mercedes-Benz saloons.

Audi, in particular, has turned this notion on its head, though, and now offers drivers a viable option from automotive cradle to grave.

The job the CLC has to do then is start the relationship with Mercedes-Benz that will last for years. To do this, the firm has to get young company car drivers into it.

First things first is to produce a car that has the necessary stylistic vigour to attract that market, and in the CLC it has succeeded – to a point.

As with the C-Class, the CLC has been given plenty of hard-edged, slabby metal that conveys an essential Mercedes-Benz trait: solidity.

The front is low and wide, four-square and steady, while the beltline rises quickly to an equally blocky rear.

There is still the faint trace of the basic Sports Coupé architecture about it though, but at least that fussy twin rear screen has been binned.

But the overall effect is much more muscly and looks different enough to persuade you it’s a ‘new’ car rather than a desperate rehash of a very old car.

Inside though, things are more disappointing.

Although there are some new buttons and steering wheel, the basic underpinnings of the cabin are unchanged, so you get that ageing rolltop dashboard that has been retired on almost all other Mercs of note, and the slightly strange driving position that makes your legs point out almost level from the seat.

The Sport models get some chequered dials and red sweepy counter needles and Direct-steer system with variable ratio and extra body skirting, but even that can’t disguise the whiff of compromise that hangs in the air.

The CLC is available with all the trinkets expected of the sector, such as panoramic sunroof and the latest infotainment equipment with Bluetooth and full iPod integration, while the engines on offer include the well-proven 200 and 220 CDI diesels and 180 and 200 Kompressor petrol units.

There has been an improvement in fuel consumption by about 12% on average on the outgoing Sports Coupé, but Mercedes-Benz is lagging behind Audi, while BMW is doing a Lewis Hamilton on them in the CO2 stakes.

With a best figure of 152g/km for the CLC200 CDI manual, there’s not a model that taps into the important sub-120g/km sector for fleets.

And without that, you’re going to struggle to attract those younger drivers who are swarming towards those low-emission models.

Mercedes-Benz is looking to sell around 6-7,000 CLCs in a full year. The vast majority will go to fleets, and most of them leased.
What will be of good news to the firm are the incredible residual value predictions the car is getting. CAP is putting an entry level CLC200 CDI at 50% after three years/60,000 miles, which is a long way ahead of the A3 and 1 Series.

No doubt the lower volumes are part of the reason, but it will ensure that despite the higher front-end price, this car is very competitive when it comes to rental rates.

Most notable among the rather unnoticeable changes to the driving dynamics of the CLC is the Direct-steer system.

A variable ratio rack combined with speed sensitive servo, it gives you all the directness you might need when parking, while at the straight-ahead position on the motorway, the steering is suitably leaden and relaxed.

On twistier roads, the ratio allows for less steering input for more turn, giving your car a pointier feel.

Which might be all well and good on the latest generation chassis but, despite a few tweaks, this is still a structure harking back to some pretty dynamically-uninspiring days for Mercedes-Benz, and it feels it.

There’s neither the feel of connection you might get in a 1 Series, or the driving easiness from an A3.

That said, at least it rides better than those two skateboards.

As for the engines, the diesels are refined enough, but lack some punch. Even the 220 CDI has only 150bhp while the 200 CDI languishes with 122bhp.

If you want to excite the youngsters, I’d have thought a more significantly sporty power output would be useful.

Trying to put myself in the place of a successful young executive, I find myself faintly attracted to the idea of a CLC.

A fairly good-looking small Merc will always be a worthwhile proposition for those immersed in the world of brand equity.

But rising above the pleasant whiff of badge snobbery is the feeling you’re being short-changed, and that this is a smoke and mirrors car rather than the real deal.