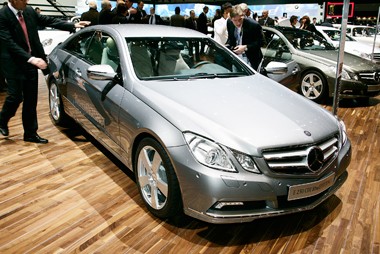 Mercedes-Benz is to cut prices of its new E-Class range by between 10 and 14% as it aims to grow its share of the executive market sector.

The new E-Class saloon, which goes on sale in the UK in June alongside the new Coupé, will be priced up to £3,000 cheaper than the models they replace, despite specification and engineering improvements.

A spokesman said the move was aimed at making its cars more competitive for corporate buyers – historically, Mercedes-Benz models have suffered in wholelife cost comparisons because of their price premium.

All E-Cass models, with the exception of the E500 petrol, will be badged as BlueEfficiency – a term used by the manufacturer to sum up its fuel saving tech-nologies and advancements such as improved aerodynamics.

The pricing and environmental initiatives on the E-Class reflect the model’s importance in the UK company car market. E-Class sales have averaged around 10,000 units per annum since the current model went on sale in 2002. Of those, 60% are fleet sales – a share Mercedes-Benz expects to continue with the new model.

The manufacturer is aiming to build on its success in growing corporate sales over the past two years (up by 16%). Mercedes-Benz Business will be aimed at small fleets operating between two and 25 vehicles, offering the full range of cars on a contract hire basis supplied direct from the manufacturer.

Smaller engined models, such as the 2.2-litre diesels, will arrive towards the end of this year.