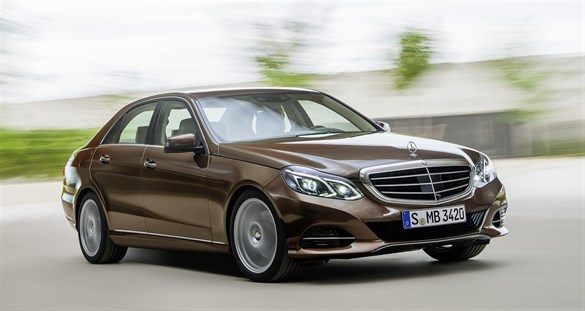 A year before the E-Class launched, Jaguar introduced the glitzy XF with its showboating interior and sleek styling – a marked contrast with the safe and sober Mercedes-Benz.

The result was that the E-Class might have appealed to people who liked the previous version, but it had a tough job trying to win customers from other premium brands.

But a subtle transformation has been underway in the Mercedes-Benz range over the last few years. Two years ago the C-Class was transformed in the most thorough facelift carried out on any Mercedes-Benz to date, and it was honed further last summer with the ‘sport’ grille being adopted as the standard appearance.

The new A-Class has demonstrated the company is seeking new audiences, and needs broader appeal if it’s to meet its target of overtaking Audi and BMW and becoming the biggest premium brand in UK fleet, in the UK and globally.

And now the E-Class has undergone the most radical revamp under the guise of a facelift. While the car is essentially the same underneath, all bodywork is new apart from the roof, and on estate models the tailgate is also carried over.

The front has single light units each side, casting aside the twin headlamp look of the previous three generations, and UK customers will choose from only SE and AMG Sport equipment grades, with the former Avantgarde mainstay now side-lined.

It comes with a range of new technology, much of which will be seen in the next-generation S-Class to be unveiled later this year.

Falling under the banner of 'intelligent drive' it includes systems that can help prevent collisions with crossing vehicles or pedestrians, and advanced lane keeping assist which can help prevent accidents with oncoming traffic - effectively looking ahead as well as behind - and anti-glare permanent high-beam headlamps.

The E-Class comes with new engines, but they are of limited interest to UK customers. While a new four-cylinder direct injection 1.8 turbo petrol engine powers the new E250 - perhaps of interest to very low mileage drivers who would struggle to reach the break even point on a four-cylinder diesel - the twin-turbo V6 E400 petrol engine won't make it to UK price lists.

However, the mainstays of the range, the E220 CDI, E250 CDI and E350 CDI are still here, although there are some improvements to both fuel consumption and CO2 emissions, suggesting lower running costs than with the previous versions.

We took a drive in both the E350 CDI and the E250 CDI, both of which will sell well into the user chooser market at senior manager level.

The 252bhp E350 CDI is as smooth as ever, and still packs a punch with 457lb-ft of torque delivered almost seamlessly through the seven-speed automatic gearbox, but with a reduction in CO2 emissions of around 15g/km, resulting in tax liability three bands lower.

Improvements to the four-cylinder diesels are more modest, but it still means you can now choose a 170bhp E220 CDI with CO2 emissions of 125g/km, or the twin-turbo E250 CDI producing 128g/km.

Those figures are there or thereabouts with equivalent BMW 5 Series and Audi A6 models, putting the E-Class back into contention with its main rivals on tax liability, not that drivers in this sector are as sensitive to high BIK tax bills as in others.

The E250 CDI we tried felt reasonably rapid and smooth, but Mercedes-Benz still doesn’t seem to have eliminated the rough edges of the diesel engine note to the same extent as its rivals.

All E-Class models are now fitted with an electromechanical ‘direct steer’ system as standard. This combines the speed-dependent power assistance of speed-sensitive steering with a variable ratio across the steering angle range.

As well as giving the steering a slightly sharper feel, it also saps less power than a hydraulic steering system and helps achieve the improved fuel consumption.

Combined with other chassis tweaks it makes the E-Class feel more surefooted without sacrificing the comfort advantage it has over its rivals.

The E-Class might not be the great all-rounder that the BMW 5 Series is, but Mercedes-Benz has succeeded in broadening its appeal and should make it more attractive to fleet operators for the remainder of its life.