IT HAS changed, I promise you. It doesn’t look like the new E-class is in any way different to the model that has been around since 2002, but in fact Mercedes-Benz has bolted, welded or plugged around 2,000 new parts into the 2006 model.

And from the outside, if you stare very hard, you will notice the grille is a more pronounced V shape, the lower bumper has been reprofiled and the lights seem to have developed some glassy eyelids.

There are also some new colours, a new air conditioning system, active headlights and brakelights which flash under heavy braking to alert following motorists. All useful but hardly earth-shattering.

Six of the 10 engines are either new or developed, while the steering is now more direct and the suspension beefed up to address its dynamic shortfall against the BMW 5-series.

However, it’s what you can’t see which has really moved the E-class forward. In particular new engines, and the use of Pre-Safe and active headrests, which use a more instantaneous electric system rather than most manufacturers’ mechanical one.

Mercedes-Benz engineers claim that once the car detects it is going into a skid, windows and sunroof can be automatically semi-closed, the passenger seat can be moved to an upright position and seatbelts are tightened to prevent ‘submarining’ – a situation where the braking force before impact makes a human body slip dangerously towards the footwell, with potentially harmful consequences.

My immediate thought was, sitting there playing with the electric windows, that they take an awfully long time to go up and down, as does the sunroof to close. It all seems a little incidental in the split-second it takes to lose control and hit something.

Mercedes-Benz reckons the average time to impact from losing control is more than five seconds and I have to admit to being sceptical.

But with a driver deliberately ‘losing’ an E-class, to the time it took to hit a theoretical object, the windows, sunroof and seat all had plenty of time to do their thing.

So when somebody says to you it seemed an age before they crashed, that’s probably because it did.

The key part of Pre-Safe though is the seatbelt, which in an instant bearhugs you.

Once the danger is past it relaxes its grip and of all the crash safety systems this is the fundamental element. Holding the body in a consistent position allows the airbags and other active safety systems to minimise the risk of injury.

The E500 is an absolutely stunning car. It’s an engine that comes with 26% more power than the last E500, pulls like a train and sounds like a symphony, and anybody who can afford to run one should count themselves very lucky. It comes at a price though, as you would expect, starting at around £47,000.

The E320 CDI, one of the firm’s stars in the corporate world, is probably a more sensible, prosaic option. It does not have the explosiveness of the E500 but is smooth, quiet and balances performance with economy, and is £10,000 cheaper.

The steering has been sharpened up on all models and the body control has apparently been improved to stop rolling, but the changes seem slight and haven’t changed the character of the car.

THE revised E-class hasn’t been turned into as sporty a car to drive as the BMW 5-series.

Instead it is a very nice, easy and comfortable car to drive and live with, with some excellent engine options and that reassuring feeling that it is all backed up with the best safety systems in the world. And that seems a pretty good combination, if you ask me. 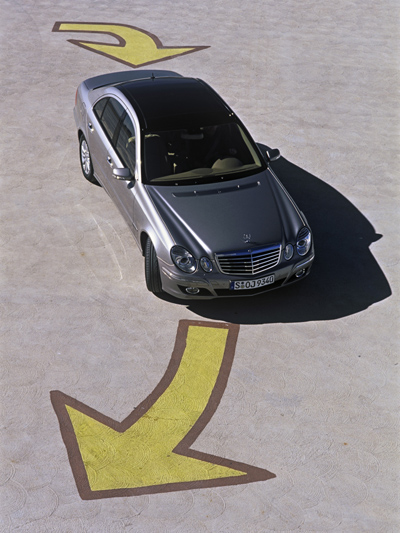