IN terms of being a hard act to follow, Mercedes-Benz’s new SLK doesn’t really have much of a legacy to live up to. Sure, the original SLK brought open-top motoring with a three-pointed star to a wider audience, but it never set the world alight as a sports car – it was far too soft and wallowy to be considered a real driver’s car.

But that didn’t deter thousands of image-concious drivers who were seduced by that clever folding metal hardtop and the cache of having a Mercedes-Benz on their driveway.

Fast forward to the present day and nearly everything has changed. The roof is still there – or not, if you press a button and let it fold itself away in 20 seconds – as is the desirability of the brand, but the new model is leagues ahead in terms of driver appeal.

A new chassis, new engines (a 3.5-litre V6 and a 5.5-litre V8 are available, as well as the 1.8-litre supercharged four-cylinder tested here), revised steering rack and a hugely improved six-speed manual gearbox finally make this a car which goes as well as it looks.

While the 163bhp Kompressor engine is no ball of fire, it does a reasonable job of hauling the SLK along, with 0-60mph taking a fraction less than eight seconds. While outright oomph isn’t this car’s forte, it does benefit from having that supercharger bolted onto the engine. 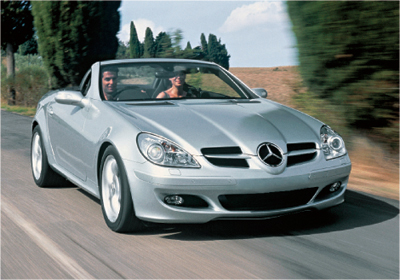 Rather than a turbocharger which takes time to spool up and provide boost, the supercharger is engine driven, meaning it is always on boost, forcing more air into the cylinders to produce higher power. This makes the SLK’s mid-range acceleration much stronger than its standing start performance. The only downside is that the engine does sound coarse as it closes in on the red line.

And with a slick manual gearchange and responsive steering, this SLK is great to hustle along a back road. OK, it’s no Porsche Boxster, but it’s a massive improvement over the previous model.

But for some user-choosers and senior management types, driving performance comes second to style, and here the SLK scores a bullseye.

With a three-pointed star housed in a prominent bonnet bulge, it gives a visual link to the McLaren Formula One cars, and also the SLR McLaren supercar. Allied to short front and rear overhangs and compact dimensions all round, the SLK has a squat stance which gives it real road presence.

Inside is a predominantly black interior which can feel a little gloomy, although there is some silver detailing to lighten the feel, such as on the gearknob and the surrounds of the heavily cowled speedo and rev counter.

With the roof up or down the SLK’s cabin is a cosy place to be, and with the optional Airscarf heaters in the headrests (£340 well spent) you can enjoy hours of top down driving even when it’s not that warm outside.

It makes the SLK a car for all seasons – snug and cosy in the depths of winter, but a head-turning convertible whenever the sun is shining.