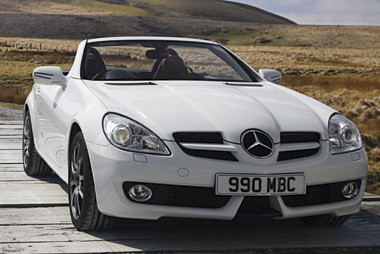 You’re not yet ready to settle down.

You want to hang on to your youth for as long as possible.

And everyone knows the best way to do that is to buy a convertible sports car.

Mercedes-Benz would like you to go for its SLK, which has been a big success since its arrival in 1996.

For 2008, the compact roadster has had an update, visually and mechanically.

Success in F1 with McLaren has inspired a sportier front-end, with a nose and front bumper vaguely reminiscent of Lewis Hamilton’s speed machine and a racing style diffuser at the back.

New materials have been used in a bid to up the quality of the cockpit, while a new steering wheel and instrument panel are the most obvious changes.

The latest SLK 200K comes with an extra 21bhp over its predecessor, giving it 184bhp in total.

This, coupled with an increase in torque, means the 1.8-litre, four-cylinder supercharged engine will propel the roadster from 0-62mph in 7.6 seconds and on to 147mph if you let it.

Thankfully, the extra grunt doesn’t come at the expense of fuel economy and emissions, with CO2 levels down 25g/km to 184 and economy up 3.2mpg to 36.2mpg.

One of the SLK’s trump cards is its folding hard-top roof – something its rivals can’t boast for the price.

It’s quick to fold down at the touch of a button, but does take up boot space.

At 208 litres it’ll hold a few small cases but for more than a weekend’s supplies you’ll want to invest in a trailer, or find friends with a bigger car.

The SLK’s size has led some to brand it a ladies’ car, or one for those who style hair for a living.

The new SLK’s sportier intent goes some way to addressing these concerns.

It’s definitely been beefed up, but it’s hardly a manly, macho machine. If that kind of thing matters, you may want to save up for an SL.

If it doesn’t, however, you’ll be more than happy to take it for a spin and it’s unlikely you’ll be disappointed.

Roadster characteristics generally fall between two extremes – hardcore sports cars, such as the Lotus Elise, or cruisers with little sporting pedigree, such as the Chrysler Crossfire.

The SLK falls nicely into the spectrum.

It’s very comfortable, with supple suspension that soaks up potholes and speed humps but keeps body roll to a minimum around the bends.

Handling is agile and the woolly-feeling steering is more accurate than one initially gives it credit for.

The engine is smooth and responds well to right-foot playfulness with a hint of supercharger whine, although I can’t help feeling that 184bhp is not enough for a machine of this ilk.

But with rear-wheel-drive and a decent if not overtly sporty chassis, the SLK is a machine that will munch up miles on motorways but still put a smile on the face through the B-roads.

It’s a capable all-rounder and should keep you feeling young for that little bit longer.

* Still not macho
* Lacking in power

P11D PRICE
The SLK is the most expensive car but the least powerful with 184bhp, although it does boast cruise control as standard, which the others don’t. The most powerful car, the 350Z, has a whopping 313bhp, while the relatively cheap TT packs 197bhp and the BMW 215bhp.

SMR COST
A comprehensive victory for the SLK, which is by far the cheapest car to service, maintain and repair with a very reasonable service interval of 15,500 miles and 16-inch tyres. The BMW is second and the Audi close behind. Both have variable servicing, while the Nissan lags way behind, needing attention every 9,000 miles.

FUEL COST
The SLK and the TT have the same 36.2mpg fuel economy and, as such, cost the same to fuel over three years/60,000 miles. The Z4 is not too far behind with 34mpg, but the Nissan puts performance over economy and costs £4,000 more thanks to economy of 23.5mpg.

WHOLELIFE COST
A strong performance all-round means the SLK is the cheapest to run over three years/60,000 miles. The Audi is also fairly frugal with the best depreciation performance. The BMW is cheap to service but suffers in residual terms, while the Nissan is not built with money-saving in mind.

VERDICT
It might be the most expensive to buy, but the Mercedes-Benz is the cheapest car to run overall and offers the best value for money for those looking for a sporty convertible that can be used everyday.

With strong residuals, cheap servicing and good fuel economy, it also attracts very reasonable tax bills and has to be the first choice.

The Audi is also a very good car and is worth a look, being only slightly more expensive.

The BMW is starting to show its age a bit and can’t compete with these two. And while the Nissan is a fantastic driver’s car, its running costs are not for the faint-hearted.