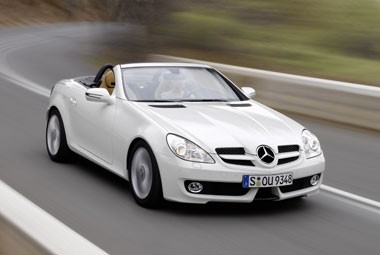 A rejuvenated version of the Mercedes-Benz SLK roadster is to be pitched as ideal transport for high-flying professional business drivers.

Due on sale in April, the revised range will spearhead the German firm’s drive for an increased share of the company car market.

“Our performance in the corporate sector may appear to be modest compared with our premium sector rivals, but our policy has never been to force sales and we never will.

“I’m expecting a similar level of growth this year as we put a total of eight new and revised model ranges in the showrooms – and we’re off to a great start with the latest SLK.”

Mr Kelly added: “Back in 1996, this car introduced the folding metal roof and the concept has since inspired lots of imitators in the sectors below and above.

Now we’re offering it with greatly improved driving dynamics, plus the styling edge to match its new personality – I’m confident it will attract a lot more buyers to the brand.”

At the media launch of the range in Monaco, Mr Kelly told Fleet News: “The SLK was unique at launch and has always commanded a strong share of the roadster market.

“It has maintained its strength and is still the one to beat.”

Restyled four years ago, the car’s front end has been revised with a grille featuring a bolder three-pointed star emblem and more pronounced V-theme styling.

According to Mercedes-Benz, the folding roof remains the best in the market, taking only 22 seconds to open or close at the flick of a switch.

Airscarf, a patented heating system delivering a warm flow of air through vents in the seat headrests to make top-down travel viable during cold weather, is also unsurpassed in the sector – but it remains a £350 option.

But the biggest changes lie under the bonnet with a revised engine line up that delivers greater power with up to 10% improved operating economy across the range along with substantially reduced exhaust emissions.

Significantly, the 2.0-litre 200 Kompressor model – the lead-in car that accounts for 58% of SLK registrations in the UK – boasts the greatest gains. With an extra 21bhp and greater torque, it provides improved acceleration, a higher top speed and 4.2mpg better economy.

Output of the top 55 AMG V8 and mid-range 280 versions remain unchanged but both have improved economy and emissions while a new sport engine allows the 350 V6 to offer an extra 33bhp with 30.7mpg average economy and cleaner emissions.

Mr Kelly said: “We see the SLK as a product that has considerable potential as part of the incentive packages offered by some businesses. It is also appeals to high-ranking professionals.

“This is an iconic product that doesn’t have direct rivals but is now decidedly more competitive against products like the Audi TT Roadster, BMW Z4 and the Porsche Boxster and represents a significant step in our moves for steady growth.

“Business users like it because of safety features such as adaptive airbags and the high level of security provided by its roof system.

“With the new dynamic styling, we think the car certainly has more of an edge.

It comes from a premium brand with premium prices, but we’ve made significant investments in the last three years to move from 23 to two in customer satisfaction surveys and are now delivering premium service along with the residual values that promise a profitable proposition for our customers.”

A lot has happened on the roadster scene since the original SLK broke cover 12 years ago and Mercedes-Benz has had to respond to increasing competition.

There’s nothing radically different about the facelifted model, but a series of small changes reinforce the premium feel from behind the wheel.

Pride of place in the line-up goes to the 55 AMG, which makes a glorious noise and has enough muscle to make blistering performance feel almost casual – although with 305bhp under its more rakish bonnet, the 350 isn’t that far behind it.

But for most SLK customers, tweaks to the 200 Kompressor version are more significant and are set to underpin much of the growth Mercedes-Benz wants.

After detailed attention to the pistons, supercharger and engine management system, the four-cylinder car has the agility to go with its more macho stance.

Clever new direct-steer gadgetry that provides slicker response over twisty routes as well as making parking manoeuvres easier is a £220 option, which is a pity – but even without it, the lead-in model still feels appreciably better.

And a longer top gear ratio improves cruising refinement into the bargain.

Women own six out of every 10 SLKs in Britain, but with extra power and SL styling cues, the latest car is likely to be more appealing to men, too.