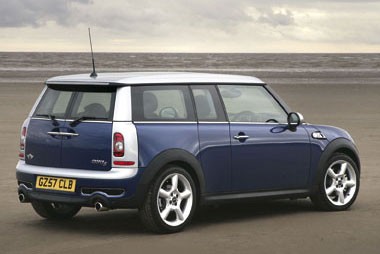 Seldom had the car world seen more controversy than when BMW launched the new MINI back in 2001.

Many fans of the original Issigonis-penned icon were outraged by the inflated parody of their beloved classic, but the wider public were smitten by its cute looks and nippy performance and more than a million have been sold worldwide.

Until recently, the range consisted of various flavours of hatchback.

But now there is the Clubman.

Immediately, more furore followed its announcement, as critics correctly noted that the twin opening rear doors of the new car were not derived from the original Mini Clubman, but from the Morris Mini Traveller and Austin Mini Countryman.

Everything forward of the B-pillar is identical to the hatchback.

Those who know the hatch will feel instantly at home inside as all is very familiar, from the huge central speedometer to the plethora of toggle switches adorning the dashboard and roof.

The Clubman is 24cm longer than the hatch and offers 8cm more legroom to rear seat passengers.

But it’s the boot that people will notice.

The split rear doors divide opinion, but they open to reveal a boot space increased by 100 litres over the hatchback to 260 litres.

Fold the rear seats down and you get 930 litres of space.

BMW has crammed in all sorts of emission-reducing technology as standard, including start-stop, brake energy regeneration to charge up the battery, and a gearshift indicator for optimal fuel efficiency.

The excellent handling of the hatchback is admirably retained.

Some say the Clubman is not quite as agile, but unless you drive the two versions back-to-back you’d be hard pressed to tell.

It’s almost go-kart like in its ability to whip round corners, although some may find the ride rather firm.

Another unique feature is a right-side suicide door to allow passengers easier access to the back.

Great in Europe, but not so good in the UK where passengers are disgorged into the road.

MINI is selling the Clubman as a more practical alternative to the hatch, but don’t be fooled.

While the boot is undeniably bigger than the hatch, it’s still tiny.

Rather than being a family car, the Clubman represents an alternative to the modern ubiquity of the hatchback.

It’s still cute, it’s still a great drive, and it’s still rather impractical, but it is that little bit different and that should guarantee it success, even if, at £15,315 with a sparse level of kit, it’s far from cheap.

The Clubman is cheapest, but has the smallest boot space and no air-con.

The A-Class includes air-con but has 15-inch steel wheels against the MINI’s alloys.

The Golf offers a big boot, but for £700 extra the Qashqai features cruise control, parking sensors, climate control and more.

The Clubman has the green vote wrapped up, with emissions low enough to put it in the cheapest company car tax band.

Over a fleet life of three years/ 60,000 miles, the A-Class, with its variable service intervals, is the cheapest car to maintain.

In fact, only around £600 separates first place from last.

Thanks to a combined mpg of 68.9, the Clubman romps home when it comes to fuel spend, partly thanks to the stop-start system included as standard.

The Mercedes-Benz makes 57.6mpg, putting it ahead of the Nissan and Volkswagen, which both return 54.3mpg.

The Golf, A-Class and Qashqai are all thumped by the rock-solid residuals of the MINI.

The Clubman is easily the cheapest car to run over three years/60,000 miles.

Strong residuals, an econo-mical engine and decent SMR costs make it more than £3,000 cheaper to run than the Golf.

The Mercedes-Benz is very close behind, but the Nissan is £1,500 more expensive again.

Picking a winner here is more difficult than it first appears.

The MINI Clubman is miles in front when it comes to cost, but if drivers want any extras – such as air conditioning – then the price will very quickly start ramping up.

Although it’s great to drive, it’s not particularly practical.

The Qashqai has piles of luxuries as standard, but is much more expensive.

Ultimately in fleet, cost has to be a big priority, and for that reason the Clubman takes it.