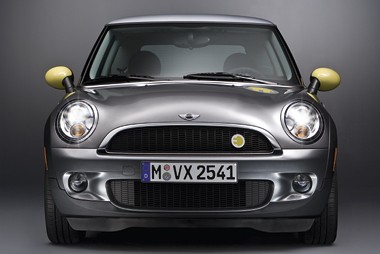 Electric cars have had a serious boost in credibility with BMW releasing a fleet of electric MINIs.

The MINI E, revealed at the Los Angeles Auto Show in November, will be leased to 500 people in California and New York for one year to allow BMW to evaluate exactly how people use their cars.

That 500 will be joined by 50 cars in Germany and, if the rumours are true, a handful will be coming to London, too.

The MINI E might be a data gathering exercise by BMW, but it seriously underlines the firm’s commitment to Project ‘i’ – an internal group within the company looking at alternative and future powertrains.

The MINI E is the most obvious example of the firm’s crystal ball gazing, with BMW hinting that an electric car will be in showrooms in the first quarter of the next decade.

With the MINI E, the aim is to offer the sort of performance that motorists today demand from their internal combustion engined cars. With 204bhp on offer, 162lb-ft of torque and a 0-62mph time of 8.5 seconds, it has achieved exactly that.

There are some downsides – the MINI E loses its rear seats and much of the boot to house its 5,088 lithium-ion battery cells while the range is only around 150 miles at the moment.

Its not cheap either, BMW is charging those early adopters in the USA $850 (£564) a month for the privilege of going electric.

Instant torque. That’s what electricity brings. The effect is quite sensational, the MINI E surging forward with real urgency.

That’s not conducive to a long battery life, but it’s tough to stop yourself from pinning the accelerator and enjoying the quiet, explosive performance on offer.

Lifting off is just as interesting, the regenerative effect being so fierce that the brake lights glow to warn traffic behind.

This allows you to drive the MINI E with just one pedal as the electric motor runs through just one gear. Driving it soon becomes second nature.

BMW claims a range of 150 miles, but in the cold around Munich and thanks to the addictive nature of its performance, it achieved only half of that in our hands.

Enough for an average commute then, and able to be quickly charged in two hours – assuming you’ve got a 48-amp outlet.

Figure on 5.4 miles per kilowatt hour – which costs around 13 pence on average in the UK.

The question of how ‘green’ the energy is you use to fill those batteries remains an issue, but driving the MINI E highlights that it’s no longer a case of if we’ll ever drive electric production cars, but when.

There are compromises with electric cars – notably charging, range and cost – but the MINI E shows that these are close to being surmounted. MINI E shows the future might be bright for motorists after all.