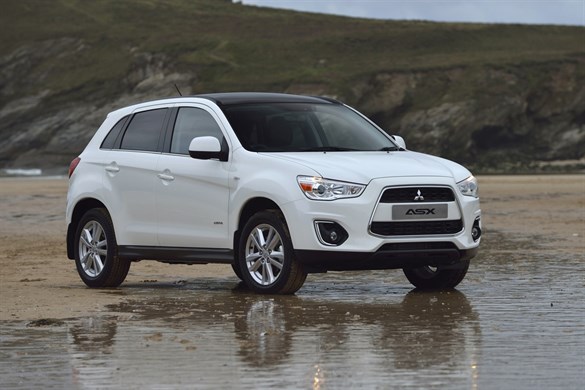 A few models in Mitsubishi’s history stand out as pioneering. While arguments rage about whether or not the Japanese company was first to market, it certainly introduced cars that appeared at the very beginning of new trends.

The Space Wagon of the early 1980s was one of the very first MPVs (some claim Mitsubishi invented the sector). The Airtrek, which evolved into the first generation Outlander in the UK in 2004, was a crossover in the mould of the Nissan Qashqai, which appeared three years later.

The Outlander has since evolved into a more conventional SUV, while the ASX has taken up the mantle in the crossover sector.

Mitsubishi bounced back in 2013 from a few difficult years in the UK, primarily caused by an unfavourable exchange rate, an perhaps the most eye-catching change to the ASX for 2014 is a substantial reduction in price.

Bluetooth has been added to the entry-level ASX 2 as standard, on top of air conditioning, alloys and seven airbags. The ASX 3 has larger alloys, electronic climate control, push-button start, automatic headlights and rain-sensing wipers as well as a leather-covered steering wheel and heated front seats. Leather seats are optional.

The range-topping ASX 4 comes with a reversing camera, integrated Kenwood audio and navigation system, and all have four-wheel drive and automatic transmission. Optional is a panoramic glass roof with LED mood lighting – something the more favourable exchange rate has prompted Mitsubishi’s UK operation to offer on the car for the first time (previously it had been ruled out as too expensive for UK customers).

We tried the new 150hp 2.2-litre diesel, which has the same specification as in the larger Outlander and also shares the same six-speed automatic gearbox. The 280lb-ft of torque available from 1,750rpm certainly gives the ASX a surprising turn of speed when required, although considering the auto ’box (which often leads to higher CO2 emissions than manuals) and four-wheel drive hardware (engaging 4WD is done via a control on the centre console), CO2 emissions aren’t particularly high.

Compared with four-wheel drive automatic rivals the ASX looks quite ‘green’ with BIK tax in the 25% bracket for the current tax year.

The engine is refined and the six-speed transmission changes smoothly, and the ASX also seems good value for the price.

Mitsubishi sees an opportunity against rivals because of competitive pricing (which, lower down the range mitigates higher CO2 emissions relative to some rivals) as well as the fact that as cars such as the Qashqai have grown in size, the dimensions of the ASX make it appealing to those who might feel uncomfortable driving something larger.

Limited time spent behind the wheel on the launch event couldn’t confirm the benefit absolutely, particularly as we were still to drive the latest Nissan Qashqai, but the ASX certainly feels nimble and agile for a tall vehicle. The steering makes for engaging cornering without offering too much resistance while composure when cornering at higher speeds is more akin to a conventional hatchback.

The ASX might have a lower profile than the Qashqai, and Mitsubishi is a much smaller player in the market than Nissan, but the improvements made for 2014 keep it on the radar as a good value alternative in the crossover sector.