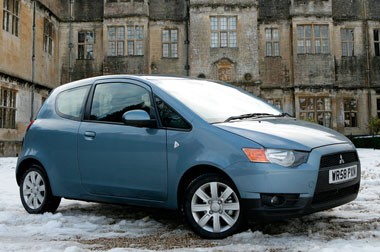 Despite an array of talented supermini rivals, the Mitsubishi Colt 1.3 ClearTec stands alone as the only petrol-engined sub-120g/km CO2 car in the sector.

While other ‘green’ branded competitors may be able to boast far greater, headline-grabbing fuel economy figures, this doesn’t tell the whole story.

Their use of diesel technology gives them a higher front-end price than the 56.5mpg Colt, and this means a fleet driver has to cover a significant number of extra miles to recoup the initial outlay if the car is an outright purchase vehicle or the additional monthly charge levied by the lease company to cover that initial cost.

Also, with diesel costing about six pence a litre more at the pumps, payback time does not appear until the car has covered significantly more miles – giving the Colt a distinct advantage over its rivals, especially for low to average-mileage fleet drivers.

Its appeal grows as no petrol supermini can match its combination of price, economy and emissions either.

The Colt ClearTec is the first of Mitsubishi’s low-emission models. It emitts 119g/km of CO2, which places it in the 10% benefit-in-kind tax (compared to 13% for diesels), as well as qualifying for road tax of £35 per year.

It achieves its emissions level through use of an automatic stop and go system which cuts the engine at idle, low-rolling resistance tyres, revised final gear ratio, high efficiency alternator, low viscosity engine oil, and other engine modifications.

Compared to its non-ClearTec Colt CZ2 sibling, this brings a reduction in CO2 emissions of 24g/km and a 9.4mpg economy improvement – for a price premium of £500, which also adds extra equipment such as cruise control and a gear shift indicator.

The Colt – larger than its predecessor – is also well positioned to appeal to downsizers, offering plenty of interior room and luggage space.

With the rear seats down it offers 1,032 litres of space compared to 854 previously.

The generous space applies to the cabin too, with room for four adults.

The well-built cabin and light steering add up to a decent driving experience, although the ride can sometimes be on the hard side.

Offering an excellent combination of economy, CO2 emissions and P11D price, the Colt ClearTec makes a strong case as a fleet option.

It may lack the driver appeal of some rivals, but its ultra-low benefit-in-kind tax bill means it warrants consideration.