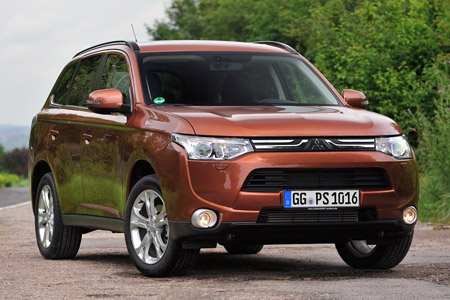 Despite having a bigger load platform and offering increased practicality for family use, the all-drive car is claimed to boast significant cuts in tailpipe emissions and fuel consumption.

Official figures are still to be confirmed, but Fleet News can reveal that the company is expecting a seven miles per gallon gain from the improved 2.2-litre diesel motor.

“An economy leap of this kind is remarkable in such a large vehicle and linking this with a major reduction in emissions is a major achievement,” a Mitsubishi Europe spokesman said when the model was previewed in Germany.

With average economy of 43.5mpg and tailpipe emissions of 165g/km, the current Outlander has been of limited appeal to fleets. But the performance should improve to 50.4mpg and 146g/km in the new car – with no loss of power.

“This should open new doors for us with user chooser drivers and fleet managers who are looking to reduce costs,” said UK concessionaire Colt Car Co managing director Lance Bradley.
Due on sale at the end of November, the model is expected to achieve 4,000 registrations in 2013, an increase of 50%.

“This is a car that will win conquest business as well as appealing to our loyal customer base,” said Bradley.

Smoother bodywork is 100kg lighter and incorporates a longer cargo floor to provide 1,022 litres load volume behind the front seats and hidden occasional seats behind the rear backrest quickly lift up to allow the car to carry seven adults.

Equipment levels are not yet finalised, but the car to replace the GX4 is expected to carry a £500-£700 premium but could include dual zone climate control, adaptive cruise control, systems to mitigate forward collisions and lane departure, a power tailgate and a rear view monitor system.

Though it uses less fuel, the latest model features a revised turbo for improved torque at low revs and still has the power to haul a two-tonne trailer.

It includes a stop-start system and new ‘smart’ system that drives the front wheels and apportions traction to the rear when necessary.

In a brief test drive, the more upmarket model appealed with a refined flow of power and a smooth-change gearbox all combining to underline saloon-like behaviour.