MITSUBISHI Shogun owners know what they like and they like what they know – so much so that 70% of buyers have already owned one before.

With that sobering fact in mind, the Japanese manufacturer has rather wisely decided not to tinker with the looks of this new model too much.

And although it doesn’t seem a whole lot different from the old Shogun, in fact only 26% of the parts are carried over.

Mitsubishi is keen to point out that this 2007 Shogun is more than just a facelift – there is a new 3.2-litre common rail turbodiesel engine under the bonnet, a fresh shape and a myriad of improvements under the metal.

The whole car looks beefier than its predecessor thanks to the adoption of some more angular light units front and rear, while there is also a high level of standard equipment which includes keyless entry, climate control, curtain airbags and 17-inch alloy wheels even on the entry-level model.

There is an upgraded and stiffened bodyshell for better ride and handling both on and off-road, together with increased levels of safety and standard traction and stability control systems combined with a 4WD transfer case and optional diff lock.

THIS new shape gives the Shogun a menacing presence on the roads that the old one didn’t have – it looks more macho at the front while at the rear, a massive plastic holder encases the spare wheel.

The Tonka toy proportions continue inside, where a new dash manages to look both stylish and slablike at the same time, while the seats seem to be built for giants. 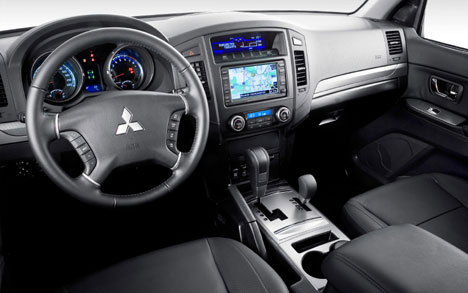 Here was my only real problem with this new car – it feels as though you are sitting on the seats rather than in them.

On the move, the new four-cylinder turbodiesel engine has quietened the Shogun’s interior by a claimed four decibels so my co-driver and I found ourselves conversing easily in muted tones. The ride and handling are also improved, but there’s still a fair degree of roll during cornering.

On a tough off-road course, the Shogun did everything we expected it to and more. It tackled some scary climbs with ease.

THE revisions bring the Shogun up to date. It looks better, drives better and has an improved interior. With a decent level of kit and good pricing, it makes a convincing package.